'Dead' Boy Returns Home after one Year on Street 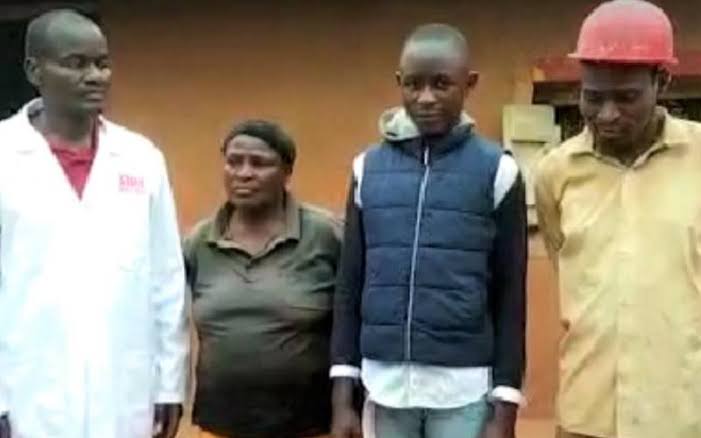 A boy who went missing in March last year and was later presumed dead has been reunited with his parents.

For more than a year and a half, his father Jackson Mura went through life with a troubled mind.

He had been trying to trace his son whom he left home one ne morning with instructions to take care of his younger siblings. A few days after the coronavirus alert was issued in Kenya and schools closed last year, I left my son to take re of his siblings.

"His stepmother had gone to visit her maternal home. I ama mason and as I left for work I asked him to do house chores, fetch water and prepare lunch for his siblings. I never imagined that anything unusual would happen" Mura narrated.

Unknown to his father, the 15-year- old boy had plans of his own. At the time, he was a Standard Seven pupil at a school in Khwisero, Kakamega County.

On the day he disappeared, his father says he looked for him in the homes of neighbours and relatives without success.

For days, weeks and months, he searched everywhere. Bits of information kept coming that the boy had been sighted in one place or another, but visits to those place yielded nothing.

At the beginning of March this year, word reached Mura that his son was among some youth who had been lynched by an angry mob after stealing rabbits in Bungoma. Shocked, Mura left for Bungoma where he says he once stayed with his family.

"After receiving the distressing news, I travelled to Bungoma to verify the information.I went to several morgues and hospitals in town but couldn't find my son's body. While that baffled me, it also gave me a glimmer of hope that he might be alive," Mura said.

Still in March, in the company of his brother Willis, Mura reported the incident in which his son was said to have died at the Bungoma Police Station. The case was booked under 0B number 72/4/3/22021.

"We were advised to be patient while the police carried out investigations"Willis said.

One month later, the boy was rescued from the streets of Kakamega by Pastor Duncan Omondi, director of the Great Assign ment Organisation, Kakamega Youth Centre.

"Our mission is to rescue children from the streets. That is how we found the boy and brought him in. We work closely with the county goverment, security agencies and the childrens department" Omondi said.

"We normally reach out to street children at night. The best time to find them is when they get into their sacks and cartons for the night along shop verandas. It's the only appropriate time we can have a chat with them. We try to persuade them to come to our rescue centre where they are given shelter, cloth ing and food," Omondi said.

It took Omondi months to get vital information regarding the boy's origins. Theft of rabbits every time the pastor brought up the subject, the boy would become evasive and say he did not want to go back home. With time, however, he talked about the Bungoma incident but denied taking part in the theft of the rabbits.

He had survived as a street boy in Bungoma where he had friends.

"Most of the time, he appeared troubled and distracted but was reluctant to speak about his family. I did not give up and kept on nudging him. With these childre, you have to be gentle lest they feel pressurised and decide to escape and go back to the streets," Omondi said.

"Most of these kids are on streets for many reasons. Some are orphans. Others have been reject ed by their parents and relatives while others have been driven to the streets by abject poverty and broken homes. All they need is care, love and understanding" he said.

After months of trying, Omondi succeeded in getting information about the boy's family.

"A few weeks back, he told me his home is in the Shirakha village of Butere. Just to be sure, we organised a trip the place.When we got there, we left him hidden in the vehicle some distance from home and went to the house he pointed out to us," Omondi said.

Adding that, "We interrogated the people we found there and the boy's story gelled with what they told us. Reassured, we brought him home to an emotional reunion."

Mura was working nearby when news of his son's return reached him.He abandoned the work and rushed home to confirm the good news.

"They searched for my son every where. Some thing kept telling me he was alive and that one day he will return home. That has come to pass and I thank God for it. Thank you for bringing my son back" an overjoyed Mura told Omond