The sister of the late Doctor Gakara from Nakuru who allegedly murdered his two children under unclear circumstances is receiving medical treatment in one of the hospitals within Nakuru.

A few days ago, the bodies of doctor Gakaras children was found in their house in Milimani Estate in Nakuru along with the body of the doctor who was at the time breathing but unconscious.

The bodies of the two children would later be taken to the Mortuary by police officers who responded to the calls of the man's neighbors. At the same time, Doctor Gakara was immediately rushed to the hospital moments after the incident.

Days later, it would be reported that the doctor who was receiving medical treatment under police supervision allegedly died due to a drug overdose that he allegedly gave to his kids before trying to kill himself only to be found unconscious.

The man's wife, Winnie would later be rushed to the hospital moments after she received news that her alleged killer husband had died.

Reports which were highlighted by different sources of information revealed that the woman who accused the late doctor of killing their children allegedly collapsed moments after receiving news of his death with sources claiming that she was waiting for him to get better for him to reveal why he killed their children.

While reacting to this incident, the family of the deceased claimed that he might have not killed the two children due to the fact that he allegedly loved them. At the same time, they called upon the DCIs to conduct an investigation.

However, the family of Doctor Gakara has revealed that his elder sister is currently in hospital. According to the reports given by the family of the deceased, they claimed that his sister was shocked after receiving news about his untimely death. 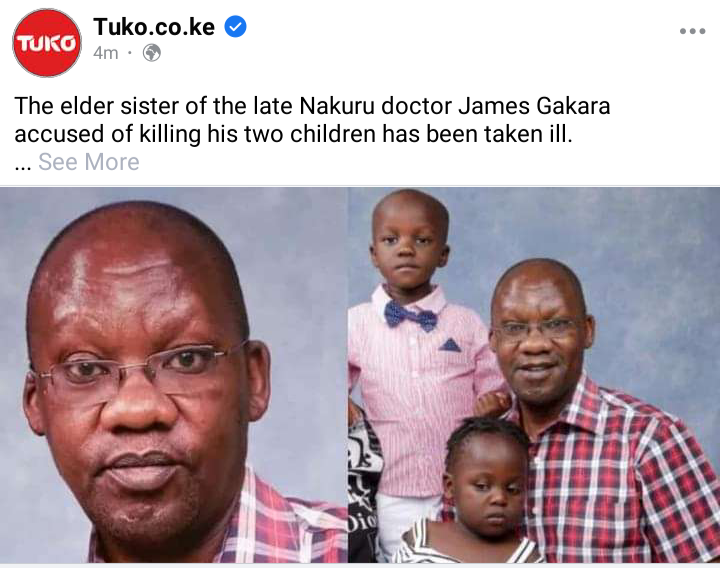