16 People Die After A Bus Capsizes While Crossing A River In Kitui County, Rescue Operations Ongoing

By maggienesh (self media writer) | 7 months ago

16 people have been confirmed dead after a school bus capsized while crossing Enziu River in Kitui County.

"A bus capsized here and we are as yet recuperating bodies that are still inside the bus. The bus isn't even visible, it has been submerged. 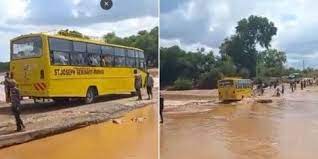 Several people are feared dead and scores missing after a school bus capsized while crossing a bridge in Mwingi.

A video shared by eyewitnesses on the afternoon of Saturday, December 4, showed the bus capsize while crossing the overflowed Enziu River in Kitui County.

Reports indicates 10 people were rescued from the incident while a few others are still missing.

The victims, who were passengers of St Joseph's Seminary - Mwingi bus were members of Mwingi Catholic Church, were heading for wedding.

Witnesses who were at the scene were have played a major role of rescue operations. 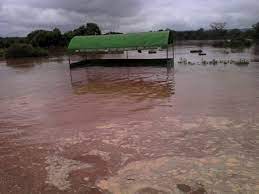 Yakan further confirmed that the driver of the bus died during the grievous incident.

"This is a river and it was flooding. The driver lost control and slid into a ditch. The bus capsized close to the bridge. The driver has also died. The bus was leaving Mwingi Central towards Nuu in Mwingi East," he uncovered.

Mishaps have been on the rise ahead of the festive season with most recent National Transport and Safety Authority (NTSA) statistics showing that 3,212 died in road mishaps between January and September 2021, an increase from 2,560 who passed on similar period last year. 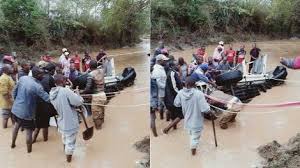 Content created and supplied by: maggienesh (via Opera News )

Beautiful facts about Uganda that you should know

Political Analysts Alleges Why Uhuruto Fight Will Give Raila Advantage To Get Mount Kenya Votes.

The Only Place On Earth Where People Float On Water