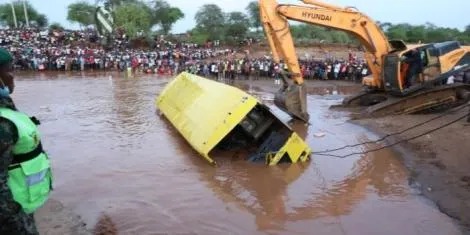 Eight more bodies were on Sunday, December 5, retrieved from River Enziu.The eight were among the passengers of the ill-fated bus that plunged into the river on Saturday.

This pushes the death toll of the incident to 33. Initially, 23 people had been confirmed dead following the incident.

Earlier two other bodies were retrieved from the river, including that of a nine-month-old baby. The wreckage of the bus which was swept away by raging waters was retrieved.

Images seen, show the bus being pulled out of the river by a crane and an excavator.

"The ill fated bus wreckage has been retrieved from the river bed and the process of ascertaining whether there are any more bodies still trapped in the wreckage or the river bed continues." she stated.

According to the survivors, the driver of the bus was reluctant about driving across the river. He allegedly took two hours before making the final decision.

A survivor, Simon Kea, narrated that the driver got confident after two matatus and some contractors crossed the flooded river. Some of the travellers who were stranded by the river banks also hopped onto the bus with the hope of getting a lift to the other side.

"We were about 40 passengers when leaving Mwingi in the morning. Around 10 seats were empty. As we were crossing the river, the 51-seater bus was full with more than 15 people standing," Kea told the Nation.

The Head of State reminded Kenyans across the country to heed Government advisory against attempting to cross swollen rivers especially during the current rainy season.