By CrimeBuster (self meida writer) | 22 days

Police officers from Bungoma are currently investigating an incident which reportedly happened in the wee hours of the day where a woman is reported to have taken it upon herself to hack her husband to death weeks after their wedding.

According to the reports given by the family and friends of the deceased, they revealed that the two had been having constant issues with their marriage despite the fact that they had just gotten married several weeks ago and so with this, the family decided to keep their distant hoping they would solve it between themselves.

However in a new turn of events, the suspect is reported to have been arrested and taken to the police station for more investigation and questioning after she allegedly murdered the young man in cold blood under unclear circumstances.

Reports received from the witnesses revealed that they heard the two having a heated argument as usual before the deceased was heard screaming in pain and agony. This was followed by a dramatic scene after they immediately rushed to the crime scene in order to see what was happening.

To their surprise, they found the lifeless body of the deceased lying in a pool of blood where they immediately launched a search for the suspect who had since fled from the crime scene and after catching her, she was taken into the police station by angry Youths who threatened to take matters into their own hands if she's not punished by law.

This incident has however sparked alot of reactions from Kenyans who seemed to have different opinions and suggestions on the matter and with others suggesting that maybe she did it in self defense, others went ahead and called for justice upon the family. 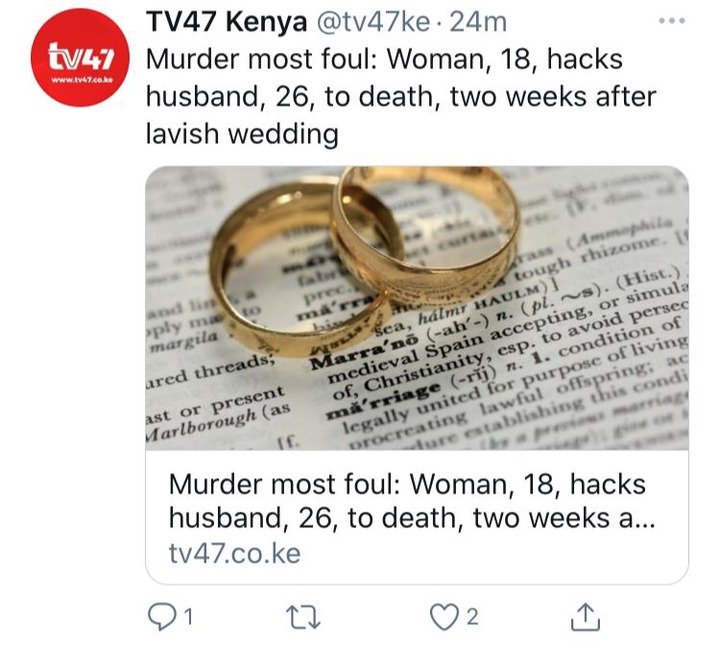 Kenyan Men Should Be Careful With This Pill

Best Age For a Lady To Get Children

Tears of Joy For A Lady Who Went Missing 30Yrs Ago, After She Was Re-United With Her Mum And Brother

3 Things Every Lady Wants From Her Man, But May Never Tell You

Latest Reports On Christian Eriksen After Collapsing in their Euros Game against Finland.

Another KCPE Candidate Disappears in Mysterious Circumstances in Kitale