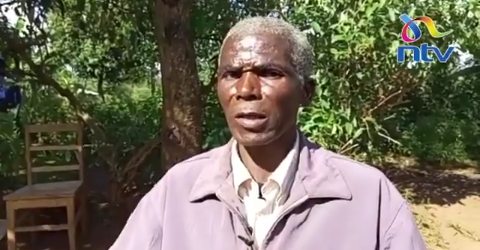 Maatsen Wanjala's father Mr Wanjala speaking to the members of the press in his home at Kabuchai constituency in Bungoma County. (Photo courtesy).

Mr Wanjala the farther to the serial children killer Maatsen Wanjala who was killed on Friday morning in Bungoma, has broken his silence on the death of his son who had escaped from Jogoo Road police station in Nairobi, saying that is not his son's wish to do what he did by killing about 13 children especially in Nairobi City.

Speaking to the members of the press as quoted by NTV, Mr Wanjala sent his apology to the families of the deceased children who were killed by Maatsen adding that it was not his son's wish to do such unhuman thing. Wanjala argued that Maatsen was a very good child while he was young but after going to Nairobi, that's when someone might have bewitched him causing him to start killing children.

However, Mr Wanjala added that as father he is so shocked with what his son did until he has been killed by the mob justice but he is ready to burry his son, and he wishes God to answer his prayers so that the person who might have bewitched his son to also follow him to the grave. "Ninaomba msamaha kwao (families of deceased children) sababu ameshafariki (Maatsen) sasa sina chochote cha kufanya. Mtoto wangu sio kupenda kwake yeye kufanya mambo kama hayo."