By kwambokaAngira (self meida writer) | 29 days 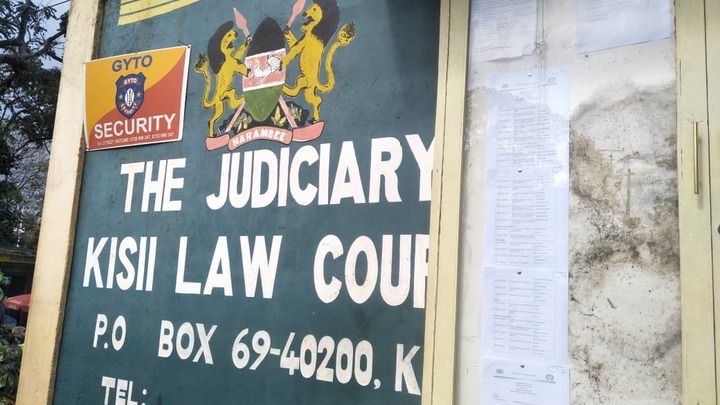 A man who is accused of slitting the throat of his son killing him instantly in Kisii, June last year has today appeared over miscellaneous act in Kisii Law court before principal Magistrate Ezekiel Obina.

Nehemiah Asiago was arrested on Friday last week at 15:05 hours at Parklands in Nairobi by DCI detectives from DCI Headquarters Serious Crime Unit Homecide section while trying to flee out of the country.

Asiago is accused that on 2nd June 2020 at about 10:00pm picked a quarrel with his Son Byron Kerongo following a domestic disagreement.

This is when he took a kitchen knife and stabbed his son in the left side of the chest killing his instantly.

The court magistrate ordered for a one week dentition to the suspect over miscellaneous crime.

Within the seven days, the DCI will conduct a DNA in forensic analysis on what was recovered in the scene of crime he is suspected on murdering his son.

On the notice of motion drawn and filled by the Director of Public Prosecution some exhibits which were recovered from the scene of crime need to be subjected to DNA forensic analysis.

Also the crucial witnesses statements are yet to be recorded and will need the court to give them more time to enable investigation progress forward.

On the an affidavit by police constable Johnstone Sang attached to the DCI headquarters serious crime unit homecide section an investigation officer in this alleged offence of murder contrary to section 203 as read with section 204 of penal code.

That the suspect to be escorted to the Government Hospital for DNA sample collection from him which will be subjected for further investigation.

The murder weapon is yet to be recovered and the suspect's assistance into the recovery is required.

The Case will resume on 19th April for plea.

What Does the Bible Say About Homosexuality?

What Rice Water Does To Your Face.