By Danteeh_News (self meida writer) | 1 months 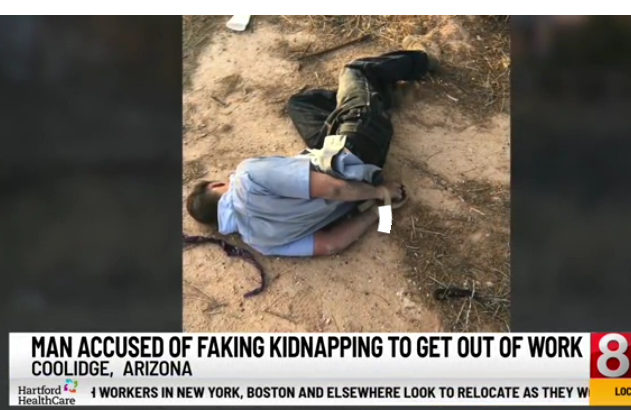 Indeed the world is full of wonders. Human beings are capable of doing anything hoping that they solve their problems and get away with it.

An Arizona man few hours ago had faked his own kidnapping because he did not want to go to work.

The man had informed the police that he was hit in the head and stuffed in a car on front of his house and claimed that he was kidnapped because of the large sum of money that his father had hidden in his house.

However police found something unusual on his explanation and they therefore decided to investigate on the matter, where they found a surveillance video from near the man's house that showed that the kidnapping never happened.

The CCTV showed how he stuffed a bandanna in his mouth, how he took his own belt to bound his hands and lying on the ground and how he scooted out on the side of the road so that somebody could see him.

He did all this so that he dodge work, but after his employer saw the CCTV footage, he ended up being fired.

Guys never joke with the job that helps you to settle your bills.

Photos:10 Types of Skirts That You May Consider.

Give Thanks To God This Morning Through This Prayer.