Man Accused Of Wanting To Kill Wife Has Allegedly Written A Will, Fears For His Life. 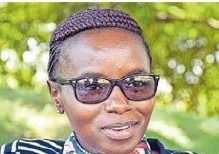 Lucy Njeri sensationally claimed that his husband Ndereba who is based in Canada wanted to eliminate her having hired Hitmen camouflaged as tax drivers.

According to her, the men who had picked her from jomo Kenyatta international airport after arriving from Canada wanted to strangle her inside the taxi but she convinced them otherwise.

She allegedly offered to pay them more money than the KSH 1.5 million they had been promised by the husband.

They then proceeded to mwiki area where they booked her a room until morning afterwhich they escorted her to withdraw the money.

She further alleged that the men are now her confidants whom she intends to use in her divorce case against Ndereba.

Nevertheless, in a Twist of events, the husband is now claiming that his life is in danger.

According to a report by daily nation, the man has admitted that indeed he asked the alleged hitman to pick his wife from the airport but didn't instruct him to kill her as Alleged.

He says the men Duped his wife Njeri with the murder plot with an intention of extorting money from her.

Now who wants him Dead?

In a leaked Whatsapp conversation between Ndereba and his wife in late December last year, he claims that the man he hired to ferry his wife from the airport has now turned against him and wants him Dead.

The fear for his life has forced him to Allegedly write a will stating that his property will be left to his mother and not his wife whom he accuses of betrayal.

"I have written my will and told my lawyer if I die prematurely, no one is entitled to my property. I will leave everything to my mother who remains faithful to me. It is written and this was after I realised sina bibi (I do not have a wife),” Ndereba told his wife during Christmas Eve. 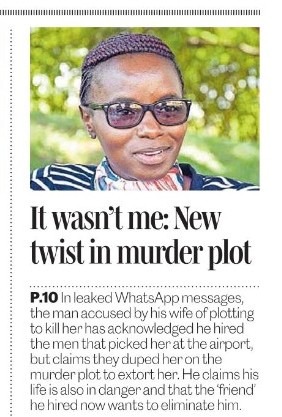