Police officers in Makueni have detained a 74-year-old woman, who was found in possession of 38 rolls of bhang and some 15 liters of illicit brew.

The elderly woman was arrested by police officers on patrol on Monday morning at Darajani village in Kathekani sub-location, Makueni county.

Confirming the incident, area assistant chief Meshack Musyoka said during the operation the woman became violent, which led to a commotion, attracting a crowd.

He said the 15 litres of chang'aa were packed in one litre polythene bags and another five litres packed in a clear jerycan.

Consequently, she was found with 38 rolls of bhang hidden in between two inner wears.

The assistant chief led the police officers who searched the house and the suspect herself after a tip off from the members of the public.

The assistant chief said “The cannabis sativa was rolled in brown pieces of paper and was recovered from the double inner wears the suspect was wearing,”.

The assistant chief further confirmed that they have investigations into the incident. 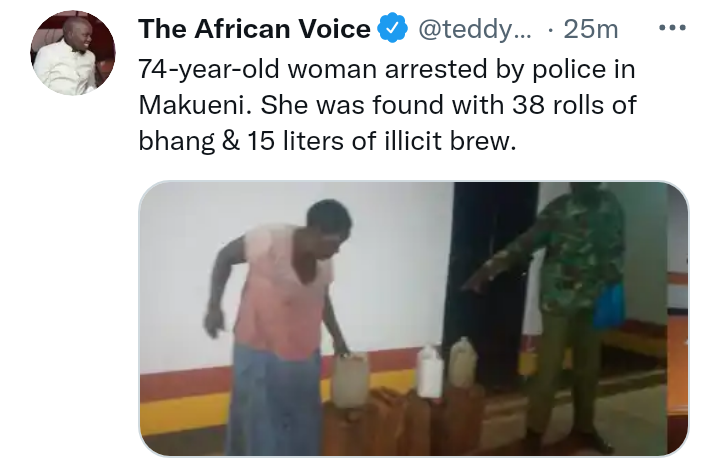