By Wabende (self media writer) | 2 months ago 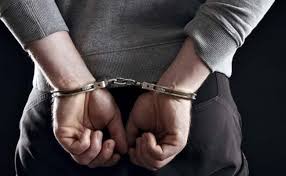 A handcuffed man.Photo courtesy of Internet.

A 22 years old man has been arrested in Konoin by police officers from Kimulot police station for defiling a primary school going girl age 14 years.

Raymond Langat is alleged to have committed the heinous act on diverse dates between the month of May 2021 and 12 the August 2021.

According to a police report seen y this opera news writer,the girl's mother who is a resident of Kapsengere village,Chebanganga location reported the matter to the police

The report further stated that when the girl left her uncle's house to the kitchen to sleep, the uncle Leonard Bett immediately went to the same kitchen accompanied by his young daughter to collect her homework book which she had forgotten.

At the kitchen, the uncle saw a leg protruding from under the bed and called the suspect out which he discovered to be a person familiar to him. The victim's uncle then immediately informed her mother who arrived shortly.

After establishing that nothing had happened, they unanimously decided to free the culprit to avoid wrath of the villagers who had gathered and baying for blood.

Yesterday the victim's uncle tricked the suspect through a phone call to go back, and he accepted the invitation .

As soon as he arrived, he found the area assistant chief Margaret Chepkemoi and the victim's uncle who immediately arrested him following a confession by the victim to her mother that she was defiled around May, 2021.

Suspect was then escorted to Kimulot police station where he was detained in cell and he is to be arraigned before Sotik Resident magistrate's court for the crime of defilement.

Sexual Offence Act state that any person who commits an offence of defilement with a child between the age of twelve and fifteen years is liable upon conviction to imprisonment for a term of not less than twenty years.