A youthful man from Kakamega County was on Monday beaten black and blue after he was caught red-handing passing water at a public place.

The victim was attacked by Jared Otieno, 30, who accused him of ignoring a "kojoa haoa uone" warning to respond to the call of nature at a public place.

According to the DCI report, Jared roughed up the victim immediately after he had finished attending to his short call, and handed him a dog's beating, leaving him with a bruised face, disfigured jaws a black eye. 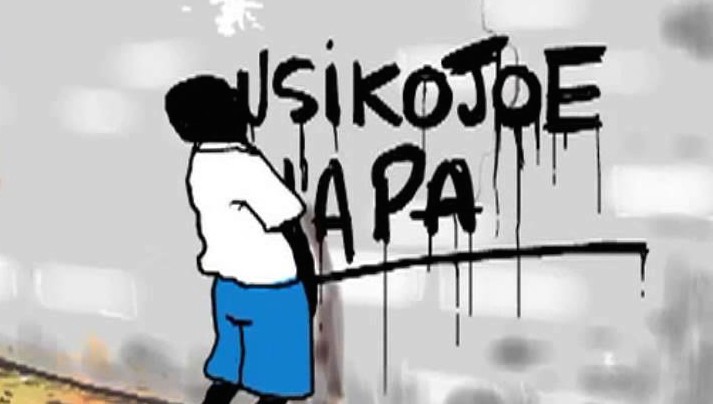 Onlookers tried to stop Jared from attacking the victim by their efforts were futile.

"Efforts by curious onlookers to calm a furious Otieno who had taken the county by-laws into his own hands yielded little results, forcing them to call police officers from Kakamega Police station who arrived immediately," DCI said in part. 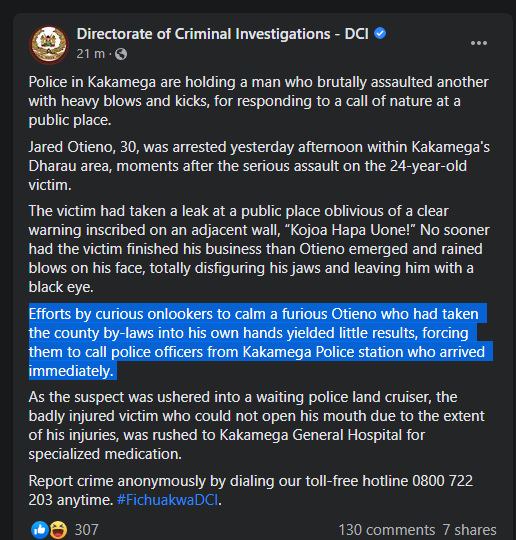 The suspect was arrested and taken to Kakamega Police Station while the victim who could not talk because of the beating, was rushed to the hospital for medical attention.

While Jared Otieno is going to be charged for taking the law into his hands, this is not the first case of people, especially men, ignoring the 'usikojoe hapa' warning in Kenya.

Pictures of men responding to the call of nature in public have been trending on social media, including pictures of police officers, an indication the warning is never taken seriously

'Usitupe taka hapa' is another warning that many Kenyans ignore to dump garbage all over, even in the CBD.