By De_prowler (self media writer) | 2 months ago 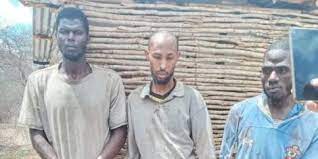 The three fugitives who had escaped earlier from the Kamiti maximum prison on Sunday have been arrested in Mwingi, Kitui county. The three, Musharraf Abdalla, Joseph Juma and Mohammed Abdi were arrested while they were on their way to Garissa.

The police have indicated that the suspects were heading to Somalia. They had escaped from the facility on the 15th of November from the Block A6 where they were being held under unclear circumstances. A bounty of 60 million was placed on them for anyone who would report their location.

The DCI boss George Kinoti confirmed the arrest few minutes ago. The escape led to the arrest of more than 13 wardens and the commissioner of prisons after which major changes were made in the Kenya Prisons. It is not clear yet if someone has been given the bounty.

This events happen a few days before the planned visit by the Interior CS Fred Matiangi and his counterpart Joe Mucheru, ICT CS to the prisons on Thursday. President Kenyatta had initially appointed and witnessed the swearing in of John Kibaso who was replacing Ogalo. This was minutes after a brief meeting held by the ministry of Interior.

Increased Insecurities Has Led To Shut Down Of Sudan Borders