Wonders as Bees Attack Mourners Killing an Old Man During Burial of His Grandson in Gatundu, Kiambu

By Description (self media writer) | 22 days ago 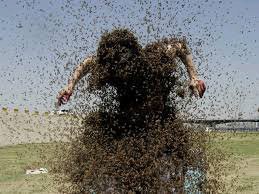 A swarm of bees disrupted a funeral at Makwa village in Gatundu North, Kiambu County where an old man died and marked the beginning of another mourning.

According to villagers, the victim Mungai Mburu had attended the funeral of his grandson who after being buried, bees invaded and attacked the old man.

The old man's widow identified as Wanjiku Mburu said that they had attended the burial with her husband. She says that after final prayers at the burial site, there was loud buzzing sound as a swarm of bees invaded. She says that everyone had to run away for their dear lives.

The widow said that as people were fleeing the scene, her 85-year-old husband fell to the ground during the stampede. She says that her husband was pushed by the crowd of mourners, fell to the ground and that is when he was attacked by the swarm of bees.

During the incident, good Samaritans tried to save him where he was quickly taken to Igegania hospital located in Mang’u area, Gatundu North.

When he arrived at the hospital, he was pronounced dead of suffocation since the bees attacked him on the head and legs in large numbers.

The escapade has left the people of Makwa village in a state of shock after a respected village elder suddenly passed away in a mysterious bees attack.

Mr Lawrence Kariuki, a resident of the village, said the bees have left everyone shocked adding that no one knows where they originated from. He added that they do not understand how the bees were able to attack the mourners so suddenly.

Some of the residents interviewed said such an incident has never happened in the area before and that the occurrence was too strange to the villagers.

It was alleged that after the incident, the bees disappeared immediately without a trace.