By TonyWainga (self media writer) | 19 days ago

Some things done by some human beings in pursuit of money are not only horrific but also plainly wicked.They can make one completely lose faith in humanity.

Like this case from South Africa where a former policewoman was hurled to a Johannesburg court last week accused of conspiracy,fraud,and murder of her five relatives.

According to the prosecutor,Nomia Rosemary Ndlovu,46, has conspired and murdered her cousin,sister, boyfriend,niece,nephew,and another sister between 2012 and 2017.

In all the murders,she is alleged to have hired hitmen to bludgeon,strangle,or shoot the victims.

She would then go ahead to claim the life and funeral insurances for her victims thereby earning cool 1.4 million Rands(Ksh 10.2 Million). 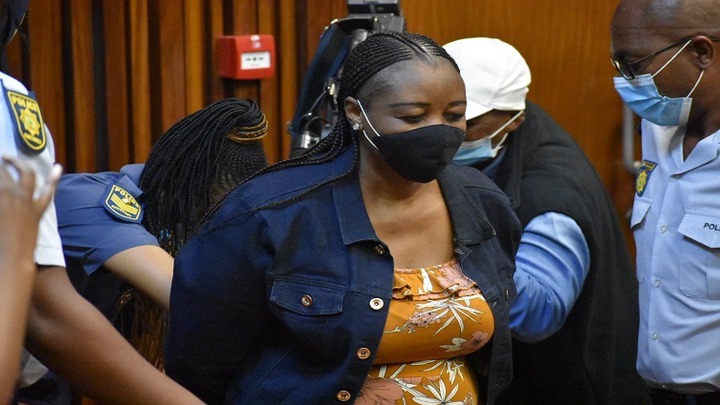 Above:Nomia Rosemary Ndlovu,46, when she appeared in a Johannesburg court (Picture Courtesy of SABC News)

Additionally,Nomia reportedly had at one time attempted to wipe out her other sister's family of six including herself through hiring a hitman to torch her house.

However,it appears like the hitman rethought about the consequences of the horrofic act he was just about to commit,and instead reported the conspiracy to police.

It was also alleged that Nomia had also conspired to kill her mother through a hired assassin.But this did not succeed as the hitman Nomia had hired changed his mind upon seeing the frail,elderly woman.He just ended up requesting for some drinking water from the old woman and he left.

This story which was first reported by the East African newspaper on 28th September,2021 has also made headlines in South Africa and acrosd the world.It just goes out to show how greed for money and wealth has made some people wicked to an extent of conspiring to eliminate their blood relatives just to obtain money.

Content created and supplied by: TonyWainga (via Opera News )