The family and friends of the late David Obilo have called upon the government to help them ferry his body to the village for a proper Burial days after he lost his life in the deadly accident that happened in Hurlingham.

In an incident that claimed over 9 lives, it was reported that a technical error that occurred on the fateful day left an unknown number of casualties nursing lifetime injuries after a Crane allegedly collapsed killing nine men.

According to the reports given by the witnesses, they revealed that they heard a loud bang from the inside after which they rushed to the scene only to find several men lying on the ground.

This was followed by a dramatic scene after they were able to rush several casualties to Kenyatta National Hospital where they are currently receiving medical treatment.

Among the deceased, David Obilo who was allegedly working with his brother was not supposed to be at work. According to the reports given by his brother, he revealed that he passed by to go and tell them goodbye since he was going to the village to propose to his long term girlfriend.

However on getting to the site, one of his colleagues told him to lend a hand and help them pull the Crane away from where it was in a deadly incident that ended up killing him along with several other men who are yet to be buried.

In an autopsy report that has been given by the government Pathologist, it has been revealed that the deceased was among the most injured victims. Postmortems results revealed that the deceased allegedly died due to internal bleeding. At the same time, his family have expressed their concerns following reports that his mother hasn't said anything after she received this news. 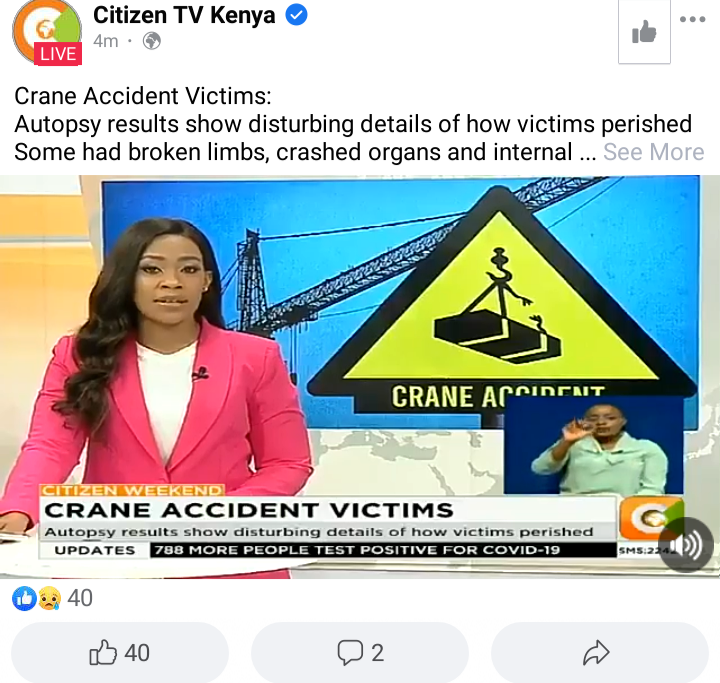