police officers in Laikipia North south county were held hostage by four bandits who attacked Kimanjo police station in Ewaso location,according to a report from Kimanjo police station it disclosed that the four men attacked the police station while other officers had gone to patrol the surrounding areas,furher it was revealed that law enforcers was caught  off guard and they had not anticipated that attack, his boss who had just stepped told reporters that bandits were allegedly manning and looking out until yesterday when only one police officers was around the camp it’s when that they attacked. 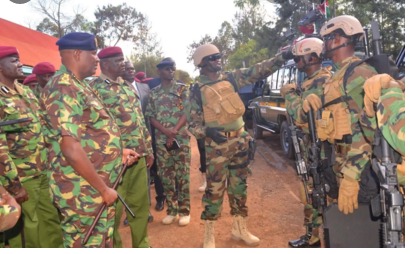 The four grabbed him to their office, later on they demanded for his ammunitions which they managed to take his gun this was after he realized he was cornered  by four heavily armed bandits, fearing for his life he followed everything he was asked to do by the bandits, they took him to his house took his police regalia and left,however his house was turned upside down.

According to the police officer the three men were very cautious as they did not want to fire any bullet to notify other police officers of an ongoing attack, they crossed on the other side of Ewaso river where they disappeared in thin air, police are still tracing their moves as they try to investigate how they were being tracked by bandits without them knowing.

Junet Mohammed Set To Be Live On Citizen TV Today

Conversion of Title Deeds in Kenya