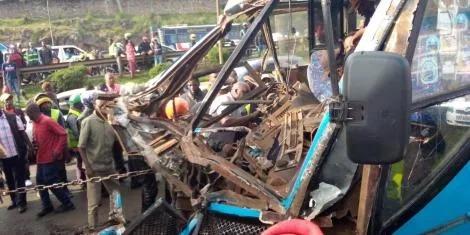 At least one person died and scores injured after a bus belonging to Kenya Mpya, rammed into a lorry along the busy Thika Superhighway in the early hours of Monday, May 9.

According to the OCPD, the driver suffered multiple leg injuries. Those severely injured were taken to Kenyatta National Hospital while passengers who had minor injuries were taken to Neema Uhai hospital in Kasarani.

"The driver of the bus lost control due to brake failure and thus rammed into the lorry. As a result, one person was confirmed dead and several injured."

"Passengers with grave injuries were taken to KNH while those slightly injured went to the hospitals of their choice," he noted.

The police boss also pointed out that the accident caused a traffic snarl-up along the superhighway as paramedics, and police officers rushed to the scene, adding that the situation was under control.

Further, another matatu landed in a ditch in Mlolongo en route to Nairobi.

A third accident was also witnessed by this writer near Sarit Centre in Westlands, along Waiyaki Way as two buses collided, with one person sustaining severe injuries.

The National Transport and Safety Authority (NTSA) has constantly cautioned motorists against speeding, and being extra careful, especially during the rainy season, which causes poor visibility and slippery roads.