By Jackwriter (self meida writer) | 1 months 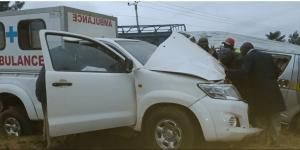 11 people are nursing injuries they sustained from an accident involving a government ambulance and a matatu full of passengers.

A report by Citizen TV indicated that the accident took place on the evening of Wednesday, July 28 along the Embu-Nairobi Highway.

Confirming the incident, Gichugu sub-county police commander Anthony Mbogo noted that the patient, a middle aged woman, who was in the ambulance, was not injured.

He further noted that 11 people sustained injuries including the nine passengers in the matatu who were heading to Embu from Nairobi.It is believed that the ambulance rammed into the matatu since its bonnet was damaged as well as the rear-end of matatu.

The ambulance, which is owned by Kirinyaga County Government, was taking the patient to Kerugoya Hospital from Embu.

“I called my officers to the scene shortly after the accident where 11 people were taken to Embu hospital.

“The patient who was a middle-aged woman was not injured ,officers made sure everything was safe,” stated the Sub-county Commander.

The matatu is attached to NENO Sacco.

The patients who sustained serious injuries were taken to Embu Hospital for treatment.

Fatalities from road accidents have been on an upward trend this year with 710 people having lost their lives in a span of two months beginning January 2021.

Government Spokesman Cyrus Oguna, while releasing the figures in March 2021, noted that the state was concerned with the increase which was a spike from the previous year's figure that stood at 562 for the same period.