The Mystery Of The Four Missing Men Takes a New Turn

By Lomartine (self meida writer) | 7 days

The case involving four friends who mysteriously vanished after having lunch at a popular club in Kitengela on Monday, April 19, has taken a new twist after police released a report revealing that the missing men were part of a criminal gang linked to motor vehicle theft and kidnapping. Jack Ochieng, Benjamin Imbai, Brian Odour and Elijah Obuong reportedly left the restaurant in a white Toyota Mark X only to vanish into thin air minutes later. 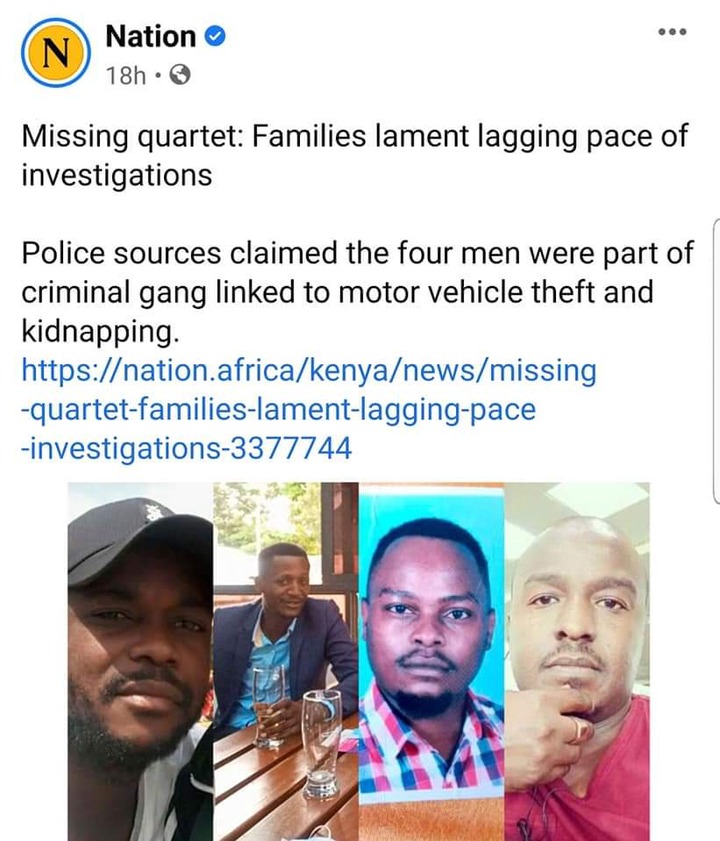 From a DCI report posted on Facebook, on 15th January, 2020, SEVEN member of a notorious criminal gang, broke and stole 900K from a parked car yard along Ngong Road, that was on Saturday 11th Jan, 2020. They were however, arrested by the Kilimani detectives and were to be processed for arraignment. What caught the attention of the public was that, among the seven names mentioned by the DCI, four of them belonged to the missing men.

As the police report reveals, before their arrest, the gang have been operating in major towns using different cars, mostly hired and displaying fake number plates. The new revelation and the puzzle surrounding their disappearance, have continued to raise eyebrows as well as bringing confusion as to what might be going on.

Content created and supplied by: Lomartine (via Opera News )