Confirmed; Here is What Will be Missing During Caroline Kangogo's Burial on Thursday 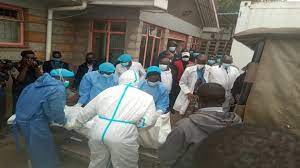 Police officer Caroline Kangogo will be laid to rest at the home of her parents in Iten in Elgeyo Marakwet County this Thursday, July 29th.

However, it has been confirmed that the burial would not receive the rites that police officers perform after the death of their colleagues.

Police said they would not attend her funeral because of the manner in which she died while she was said to have committed suicide, the Daily Nation reported.

As of Thursday morning, July 28, Kangogo's family said the police department had not contacted them about funeral arrangements. Kangogo's uncle, Robert Kipkorir, who is also the family's spokesman, said they had finalized the funeral arrangements and a formal ceremony would be held.

He said the body of the 34-year-old deceased, would not be cremated as she allegedly explained in a message that police said was found on her phone.

An autopsy revealed that Kangogo had died from severe bleeding after shooting herself in the head.

However, Oduor said they had not yet determined how Kangogo died adding that they were awaiting the results of the laboratory after taking samples that would help in their investigation.

As previously reported, Kangogo's father maintained that her daughter had committed suicide and dismissed allegations that she may have been killed.

Part of the Kenyans had expressed their views on the circumstances that led to Kangogo's death after her body was found in a bathroom at her Iten's home, Elgeyo Marakwet.

Speaking to Citizen on Sunday, July 18, Kangogo's father, Barnaba Kibor, urged those who thought his daughter had been killed to testify.

Kangogo is the main suspect in the assassinations of Constable John Ogweno in Nakuru and Peter Ndwiga in Thika, who met their deaths less than 24 hours ago.