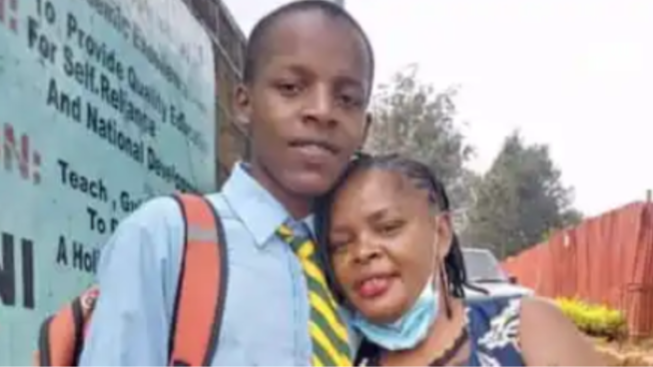 (Mary Mbage with her son)

Mary Mbage, has opened on the behavior of her son Brian Mbage, a 17-year-old boy who was reportedly lynched after sneaking into a girl's dormitory at Kamothai Girls high school.

Mary has hailed her fallen son for being disciplined and hardworking.

She also disputed the by the school that her son her son succumbed to serious injuries he sustained after falling from a storey building in the girl's school.

Mary accused the school of concealing the real cause of death of her son.

Mary further stated that she did not any signs of beatings when she looked at the injuries on her son's body and suggested that the injuries from Brian's head shows that he died from trauma.

The Directorate of Criminal Investigations (DCI) in a statement said that the victim had sneaked together with five other boys into a girl's dormitory at Kamothai Girls High School, at around 4am before they were spotted by some students who raised the alarm.

The DCI said that the school guards, teachers, and students rushed towards the dormitory to find out what was happening before confronting victim who sustained serious injuries in the ensuing melee. The agency stated that his accomplices managed to escape.

The victim was later taken to hospital for treatment but unfortunately he succumbed to his injuries.

The DCI cautioned the public against taking law on their own hands and allow the law to take it course.

You Can Do Anything in Kenya if You are Not My Friend, Ruto's Message to His UDA Members