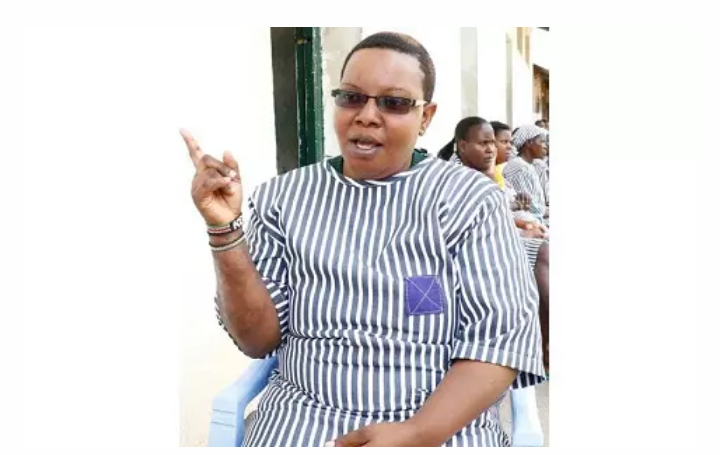 For many Kenyans, the term 'side chick' or 'mpango wa kando' is a common one. It is simply a woman who is not entitled to be a man's legal spouse with whom they enjoy conjugal rights.

The cases have been rising in the country right from the unmarried to the married. It has even reached the level where a man's wife knows the husband's side woman and she never even bothers because it's kind of 'normal'.

But for Susan Nyathira, it was different as she could not live with the pain of knowing that her husband has another side woman. She had to take the law into her own hands, something that sent her behind bars for 10 years.

It is from prison where she recounted how things unfolded till she found herself behind bars. In a sit down with a local daily, Ms Nyathira narrated how she killed Ann Njeri, her husband’s alleged mpango wa kando.

It is through a mission to establish whether Njeri was having an affair with her hubby that turned into a tragedy ending in tears, pain and regrets for Nyathira, now whiling her time at the Nakuru Women GK Prison.

As she continued with her sentence, she revealed that her husband had already remarried.

According to Ms Nyathira, she had suspected for four months that her friend Njeri was in an intimate relationship with her husband but she did not know how to approach the matter since she feared offending both parties.

As she then continued to ponder on the issue, rumors of her husband's affair with her friend continued to bombard her till she lost self-esteem, and at one point, walked out of the marriage just to cool off.

“I was angry after receiving reports that my husband’s affair was public. I was ashamed that my dream of living a happy life was fast fading,” Nyathira narrated. 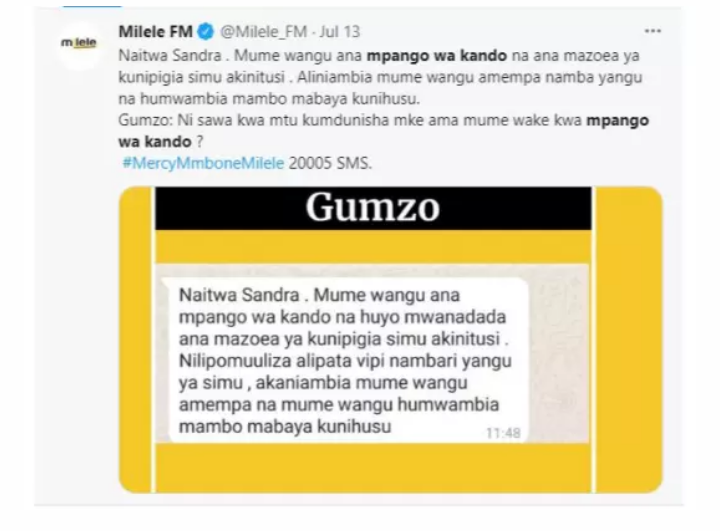 The young mother left her matrimonial home and moved back to her parents’ house to oppose the affair but her father convinced her to go back to her husband and work things out.

How did she lure her to death?

Nyathira recounted how on a sunny afternoon she used a kitchen knife to kill Njeri after luring her into her Narok house. She revealed how she stabbed Njeri in the thigh and stomach since she could not stand the thought of sharing her man with another woman.

Nyathira was married young, 16 years old. She believed that that married couples remained faithful till death did them part.

“My husband was my first lover. As far as I was concerned, marriage was a union in which people who love each other come together and enjoy life together. How wrong I was!” she recounted.

The now 30-year-old said she is remorseful and regrets the extremes to which she went, in the hope of salvaging her marriage.

The regretful woman fights to hide the pain of being away from home, blaming her shattered dreams on uncontrollable anger and naivety that are typical of the youth.

Before she killed Njeri, Nyathira confronted her the night before demanding that he clear the air over the secret affair, which she claimed had made her a laughing stock at the market.

“I remember clearly how things happened that day. I woke up as usual, not knowing that it would be my last day in that house,” she recalled.

At around lunch hour, Nyathira's husband was not around so she decided to grab a quick bite and walked into a nearby cafe before she ordered takeaway boiled meat.

As she was busy enjoying her meal after leaving the cafe, she received information that Njeri had been seen around and then she decided to confront her about her affair with her man.

Nyathira then went ahead invited Njeri to her house, but things took an ugly turn when they started quarrelling. It when an angry Nyathira picked a kitchen knife from the table and stabbed Njeri, who later succumbed to the wounds. 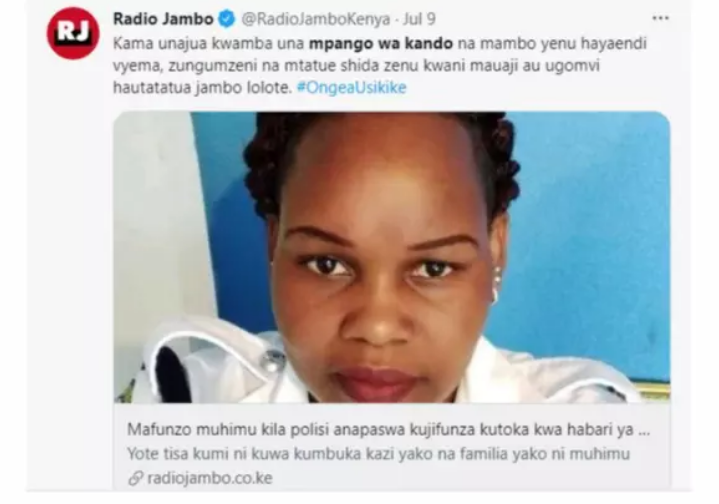 “I confronted her and demanded to know the truth. After about 20 minutes during which Njeri denied having an affair with my husband, I got very angry, picked a knife and stabbed her. Before she died, she admitted to the affair,” Nyathira said.

After cooling down upon stabbing Njeri, it is then when Nyathira realised she had killed her friend. She then took a phone and called her husband who later arrived at the gory scene “shocked and speechless,” Nyathira said.

Nyathira was arrested and taken to Nairegi Enkare Police Station as the body was moved to the morgue. She remained in police custody for 19 days before taking a plea as police did investigations.

Nyathira was locked up alongside her baby and stayed in remand for four years before she was sentenced to serve 10 years at the Lang’ata Women Prison. The young mother was moved to Nakuru four years later.

According to Nyathira, she fell into depression while at the Lang'ata Women's Prison after learning that her husband had moved on and remarried.

“I was in denial. Everything happened so fast and I found myself in prison where my whole world came crashing down,” Nyathira tearfully said adding that she is remorseful and regrets what she did. 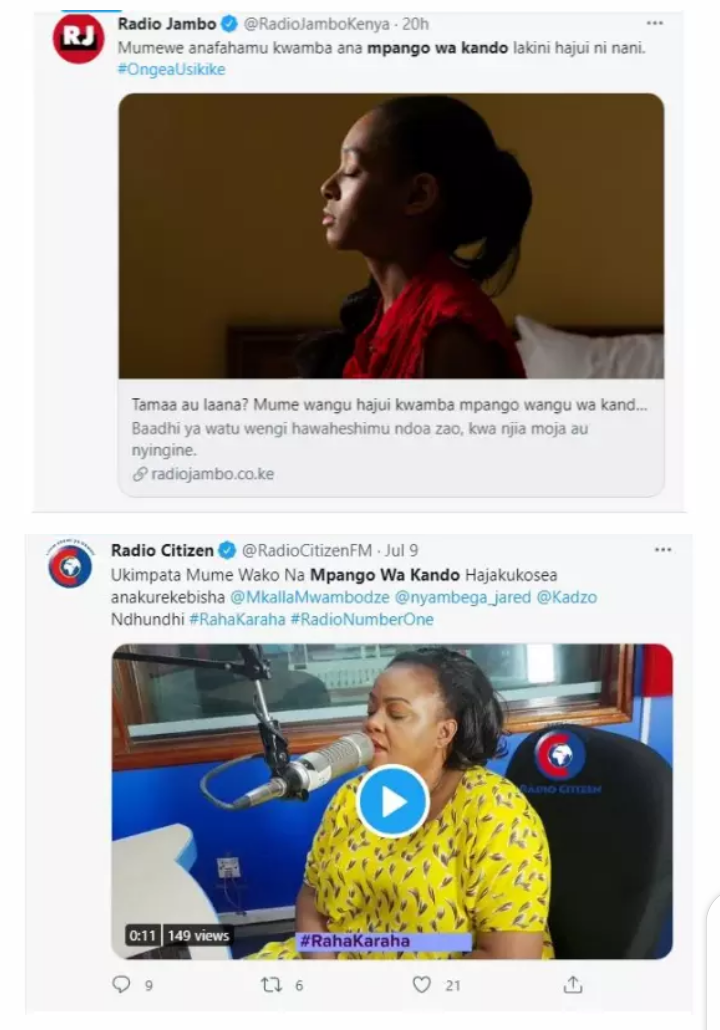 “If I get out of prison, I will start my own salon, though my main concern is to teach my peers on anger management,” she told a local daily that visited her.

“If only I was able to control my anger, I would be home with my family right now. But it’s too late and unfortunately, I can’t undo what I did,” Nyathira concluded.

Her wish now is that her family forgives her as she has learnt from her mistakes and turned a new leaf.

It is sad to learn of the extent a mpango wa kando can cause trouble in the family. Men, it doesn't take a lot to always iron out things with your spouse as this will always calm the unspoken fears.