By Trendingnewster (self media writer) | 12 days ago

Rehema (not her real name), a 20-year-old girl will never forget the day a police officer named Raphael Paul forcefully slept with her in Arusha, Tanzania after giving her a thorough beating and forcing her to lick his privates.

After the incident taking place on 16th January 2016 and the man being sentenced to serve 30 years behind bars, the government has again called the case saying that the sentence against the police officer is not enough.

On a fateful day, Rehema, a Secondary School student by then had gone to spend the night at a relative's house, unfortunately, she did not find the relative at her place and was forced to seek help elsewhere and even get a place to lay her head. She decided to look for a friend called Sakini (not the real name) it was around 8:00 pm when she started looking for her friend but unfortunately her phone did not go through.

She started looking at her manually but it all bore no fruits, she was forced to go where she dropped after traveling from home and that is where she met this man Richard, he tried helping her but it did not bear fruits either.

While in a conversation with Stephen, a man who introduced himself as a police officer appeared and asked if the two knew each other, when Stephen responded that he was only trying to solve the girl's problem, a hot slap followed that left him in pain.

The police officer then frogmarched the duo to the police station before letting Stephen leave, he then directed Rehema to a dark place which was located in the middle of a football pitch. He slapped her till she lost her consciousness before forcefully engaging in the act with her. The girl woke up only to realize that she had no clothes on, that is when she realized what transpired, she found the policeman ransacking her bag.

When the officer realized that the girl was up, he forced her to satisfy him by sucking him, this pissed of the girl, at first she did it, but as she got fed up even further, she bit the man's private which forced him to insert fingers in the girl's private to destroy her system. After doing all the dirty acts, he Urinated in the girl's privates before walking away.

After the officer walked away, the girl picked herself up and informed a woman who was working at a police station, the woman later helped the girl inform her parents on what she went through. 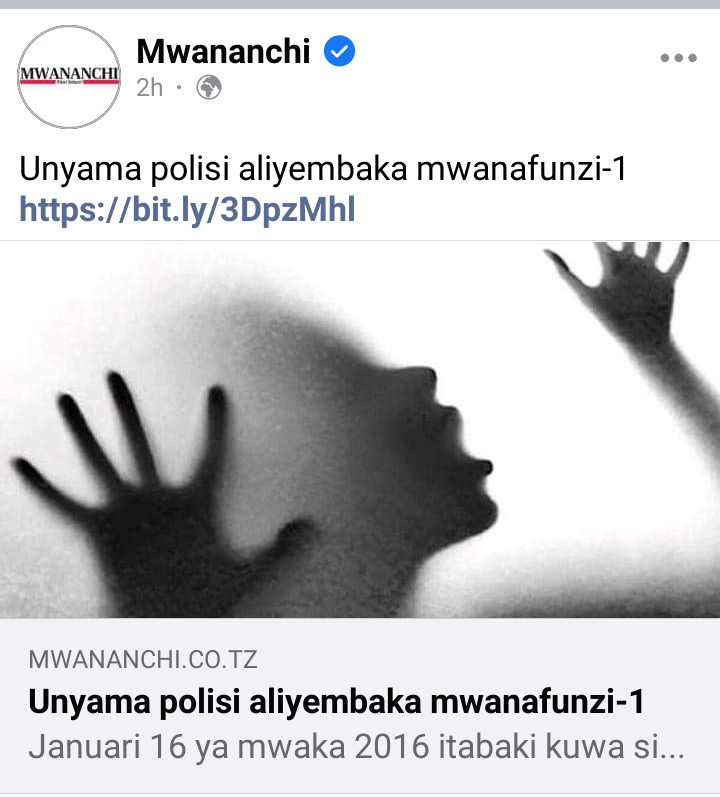