By Desert~rat (self media writer) | 7 months ago

A 15-year-old shamba boy landed himself in hot soup after he was thoroughly caned by members of his village who were also contemplating of lynching him.

Omwami not his real name who hails from Oruba, Suna West, Migori County, found himself on the wrong side after he was cornered by the locals peeping from neighbor's window as a way of trying to escape from the house.

Omwami alongside his accomplices, had allegedly gone to steal at his neighbor's house while he was away.

They managed to get into his house by breaking and going through his window where they spent few minutes packing valuable items of unknown value.

However, their mission went wrong while they were trying to escape from the scene as they were cornered by locals.

His accomplices managed to escape into thin air leaving him alone in the hands of the enraged locals.

He was given a thorough caning before was rescued by the police while they (locals) were contemplating of lynching him. 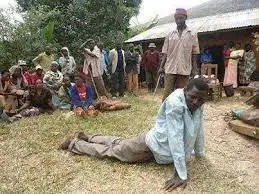 Stray Tyres from a Moving Trailer Hit a Matatu in Nakuru, One Driver Allegedly Injured (Photos)

History: You Killed Him, You Burnt Him Now Eat Him- Drama That is Still Fresh in Kenyan’s Mind

What Miguna Has Requested the Gov't to Set Up