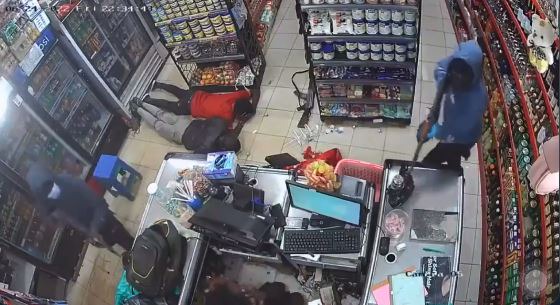 Two robbers armed with 2 AK-47 guns were captured on closed-circuit television (CCTV) raiding a supermarket and making away with an unknown amount of cash.

CCTV camera captured the armed robbers raiding Spice Supermarket in Mukono District of Uganda before firing at the cashier who was serving customers.

According to a police report, the robbery incident happened at around 11 pm on Friday.

In the video, two robbers are seen entering the supermarket and directly heading to the female cashier, who was serving two customers.

The robbers then dropped to the floor an AK-47 they had snatched from the security officer at the entrance.

One of the robbers is seen firing at the late while the other fired at the computers as they demanded the lady cashier load their bag with money.

The robbers also ordered the customers to lie flat on the ground with their faces down.

After getting the cash, the robbers are seen leaving the supermarket.

Police have since noted that the cashier was shot and injured during the attack.

Investigations have been launched to arrest the suspects.

The case in Uganda is almost similar to a case that happened in Kitengela a few weeks ago where robbers armed with an AK-47 and a pistol followed a woman to her compound and swept her house clean.

Just in: Chaos in Kisii As 4 Ballot Papers Are Found Marked For Certain Candidate-Video

Just in; Vehicle arrives with unsealed ballot boxes with no officers escorting the Vehicle. (Video)

UPDATE: MP Didmus Barasa Resurfaces on Social Media With a Post, Shares Photo of Him With DP Ruto