By KrimeExpert (self media writer) | 1 year ago

A family from Meru is currently mourning the untimely death of their relative who is reported to have been found dead in her room under unclear circumstances, days after she allegedly sent a message to her parents claiming that she was being tortured by her boss.

According to the reports given by a reliable source of information, it has been revealed that the deceased who has been identified as Juliet called her parents claiming that she was being mistreated and for this reason she she called upon her parents to find a way for her to come back home.

This was followed by a dramatic scene after the body of the deceased is reported to have been found dead in her room by one of her colleagues. Reports given the witness has revealed that her cause of death is yet to be disclosed. The deceased was brought back to Kenya today.

While reacting to this incident, kenyans who took to their different social media accounts to express their opinions and suggestions on the matter have called upon the government to consider investigating this incidents in order to put a stop to the ongoing cases of kenyans who are dying in the middle east.

According to the reports given by most Kenyans, they claimed that it was so unfortunate that the government was silent despite the fact that Alot of kenyans were dying in the Middle East under unclear circumstances only to be brought back to the country in body bags.

Due to this reason, kenyans who commented on the matter claimed that the only way in which the government was going to reduce this cases is for them to carry out an investigation to show that they care about kenyans who are currently working in the Middle East. 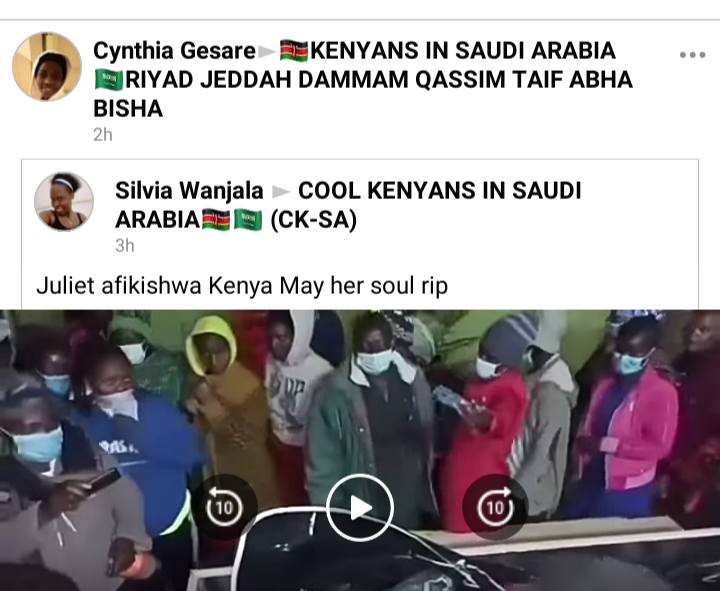