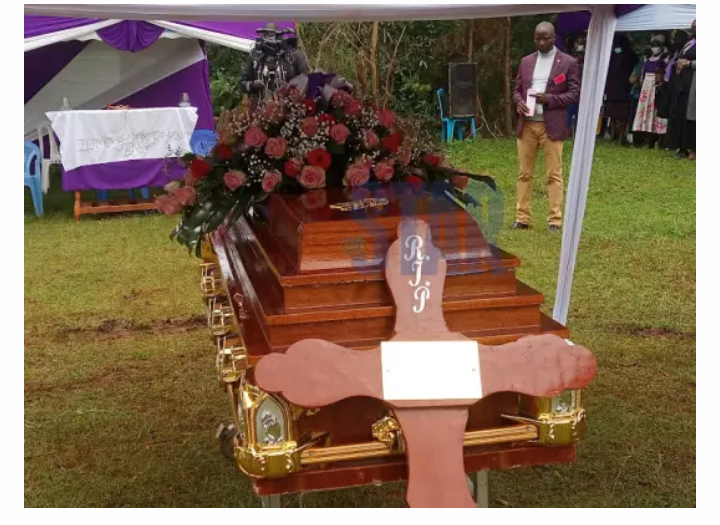 Her uncle dismissed rumours that she was buried in her wedding dress as per her wish, saying they were not sure if she wrote the messages found on her phone

The 34-year-old killed two men, her lover constable Ogweno and businessman Peter Njeru in a span of two days in different locations

Police officer Caroline Kangogo who was found dead in a bathroom at her parents' home, was laid to rest on July 29 in Nyawa village in Elgeyo Marakwet County .

Kangogo left behind a widower, a senior police officer, two children, a son, and a daughter who were present at her funeral.

Kangogo was eulogised as a good person and not as perceived in the media. Her firstborn son, paid a glowing tribute to her, and he said:

"Rest on but your memories will always live on with us."

Her parents, Barnabas and Leah Kangogo, also eulogised her as a great, loving and caring daughter.

"You dedicated most of your time, energy and resources to ensure that your children were well-disciplined, educated and provided for," the heartbroken parents said in their tribute.

She was laid to rest per Catholic rules but was not accorded police burial rites as it is the norm.

Speaking to Citizen TV at the burial site, Kangogo's uncle dismissed rumours that she would be buried in her wedding dress per her wish.

"Alizikwa tuu na nguo ya white ya net na sio wedding gown. Hio ni nguo tuu ya kawaida. Ile maneno wanasema iliandikwa sisi hatujajua hakika kama ni yeye aliandika kwa sababu wengine wetu hatukuona na hatukuwa na hio simu. Kwa hivo tumefanya tuu mazishi ya kawaida (She was dressed in an ordinary white dress and not a wedding gown. As a family, we are not sure if the messages the police claimed were saved on her phone were written by her.We buried her in a normal way)," he said.

Kangogo killed two men before she allegedly shot herself

The 34-year-old killed two men, her lover constable Ogweno and businessman Peter Njeru in a span of two days in different locations.

According to the Directorate of Criminal Investigations (DCI), Kangogo lured Peter Njiru to a hotel in Kimbo, Juja area, at around 4 pm on Monday, July 5.

Kangogo aid for the room, and at midnight, she left the room and fled to an unknown destination, leaving the dead man’s body in bed.

Njiru's lifeless body was discovered the following morning in the hotel room.