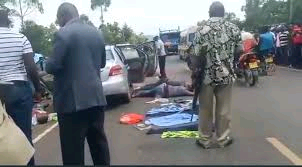 Witnesses accounts revealed that the two armed men were trailing an elderly woman, who is a businesswoman in before she raised alarm.

According to the locals, the woman was heading to work when she saw two men following her closely behind her car aboard motorbike. 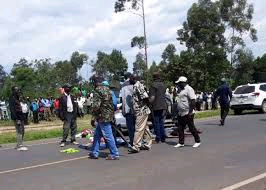 Mombasa County Police Commander Manase Musyoka who confirmed the incident said the officers were acting on a tip-off from the members of the public.

Musyoka said the officers gave the two suspects a chase before they cornered the duo at a roadblock.

The officers are alleged to have ordered the duo to ground down their weapons ,but they defied the orders and began shooting back at the officers.

Angered by their conduct, the policemen responded back and gunned the two armed criminals to death.

Three Ceska pistols loaded with 32 rounds of ammunition each were recovered from the duo.

Their corpse were moved to Mombasa town hospital mortuary for postmortem.

Investigations into the Wednesday morning accident are underway. 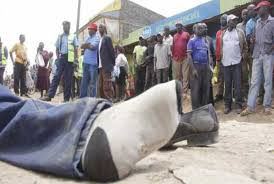 The Most Stylish And Expensive University Gates In Kenya.