By valentinehenry (self media writer) | 3 months ago 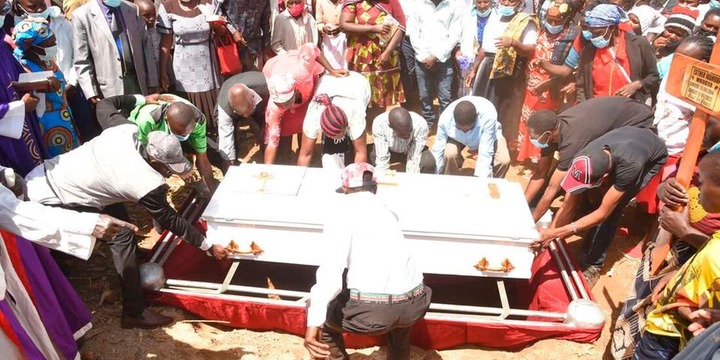 Ms. Esther Wambui was laid to rest in Miti Mingi, Elementaita, Nakuru County, the family of the beautiful and charming girl pained by the circumstances of her death.

The body of Ms Wambui, 18, was found last week dumped outside the GSU’s Recce training grounds in Ruiru, Kiambu County, with a revenge note scrawled on her palms, chest and thighs.

The deceased reportedly fled her home unceremoniously two year ago, only to return back on Tuesday, this time round in a coffin.

Overcome by by emotions, Ms. Wambui's mother remained silent during the entire funeral service. But when Ms. Wambui’s father, Mr Samuel Mbugua, rose to speak, he described his daughter as a treasure he was privileged to have owned.

Although she dropped out of school in Form Two to find work and try to improve her family’s financial status, her father noted how she was a loving and obedient child who dedicated herself to church work before she left home.

"My daughter was ever joyful. There is not a single day we ever quarrelled over pending work. Sometimes she would even forget to eat because she always wanted everything perfect," said Mr. Mbugua while fighting tears.

Until her untimely demise, Ms. Wambui was working as a waitress in Ruiru, Kiambu County. She was reportedly abducted before her mutilated corpse was found stashed in a suitcase and dumped near a GSU camp in Ruiru.

A postmortem report would later show that she was strangled to death. More samples were also taken for forensic investigations to establish whether her murderers also raped her before she died.

Besides the body was also a 'revenge note' alleged to have been authored by her killers, with a message, "Bwana Ya tu Sumu." Detectives however believe that the note was only aimed at distracting investigations.

Sultana: Kokan Is Happy To See JJ Going To Pay Dowry To Stay Away From Sultana

Meet wives of Kenyan Local Vernacular Musician John Demathew and their side hustle;

Meet the famous and popular Kikuyu artist Late Muriithi John Walker, his family and cause of death;

"I have dated Simple Boy 10 years But He has never Kissed Me" Pritty Vishy Says.