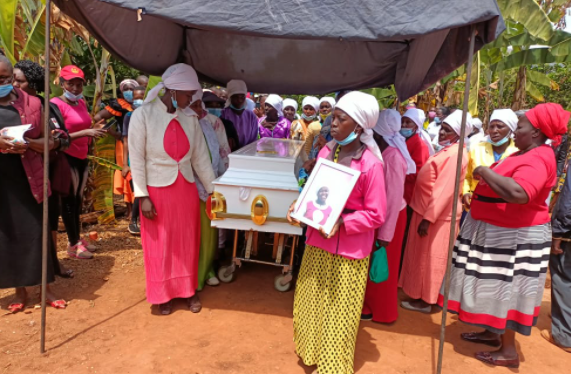 Residents from one village in Murang'a county, have decided to speak up about a certain church. It is believed that the Church has been barring it's members from seeking medical attention.

The residents said a handful of people have lost their lives and they are now calling upon the government to take action. Most of the lost lives are from that church claiming that they do not seek medical attention.

The outcry comes days after a 30-year-old woman died while giving birth in her home earlier in the week.

Stella Njeri is said to have developed birth complications prompting one of her neighbours to alert health officers who rushed to her rescue and ferried her to a locally known hospital, "Maragua" hospital.

However, upon arrival, Njeri and her husband remained adamant that she will not be admitted to have a cesarean section delivery as advised by the doctor.

Cecilia a health officer who had accompanied Njeri said her husband appended a signature on the hospital records that he won’t allow the wife to be admitted to the hospital.

“I took a lot of time to convince them to go to the hospital for safe delivery but even after getting there they were adamant to be attended by any doctor,” she said. Njeri was reportedly dead soon after getting back home from the hospital.

The residents out of fury threatened to set their home on fire in protest for her death claiming that this is not the first incident to occur. Here there are some of the residents reactions about the scenario.

Mary one of the residents said about six other people have died under similar circumstances for failing to seek medical attention.

Mary said that the church locally known as "Kigooco" has strict doctrines which bar their followers from seeking medical attention.

“When the faithful in the church fall sick, they are advised to stay indoors as their leaders pray for them to get healed,” she said.

Further, she said the founding bishop alongside his wife and four children all died under similar circumstances of failing to seek treatment.

John, another resident from the area said that the government should take action against the leaders of this church saying they take advantage of the vulnerability of the people to brainwash them.

“We want the church closed and its leaders charged for the lives lost,” he said.

Can your doctrine prevent you from seeking medical attention? Share your opinion and remember to share,like and Comment.