Grief As Kirinyaga Man Reportedly Kills Mother Who Refused To Give Him Ksh. 6k He Asked For

Police officers from Kirinyaga have arrested a man who is reported to have killed his mother after she allegedly refused to give him Ksh. 6k that he had requested for.

In a news report that has been shared by a reliable source of information, it has been revealed that the suspect was arrested after he allegedly attempted to flee from Kirinyaga after committing the crime.

Addressing this issue, police officers who are currently investigating this incident have revealed that the suspect allegedly hit his mother on the head with a blunt object killing her on the spot after she refused to give him the money.

The suspect who was arrested later on was allegedly taken to the police station for more investigation and questioning over the same incident. This is happening at the same time when kenyans have been urged to take their mental health seriously due to the increasing rate of crime in the country.

While reacting to this incident, kenyans who took to their different social media accounts to express their opinions and suggestions on the matter have called upon the government to consider looking into the already increasing cases of unemployment in the country.

According to the reports given by most Kenyans, they claimed that one of the main reasons why crime is currently on the rise in the country is due to the fact that Alot of people are currently Roaming free all over the country with actual valid papers without jobs. 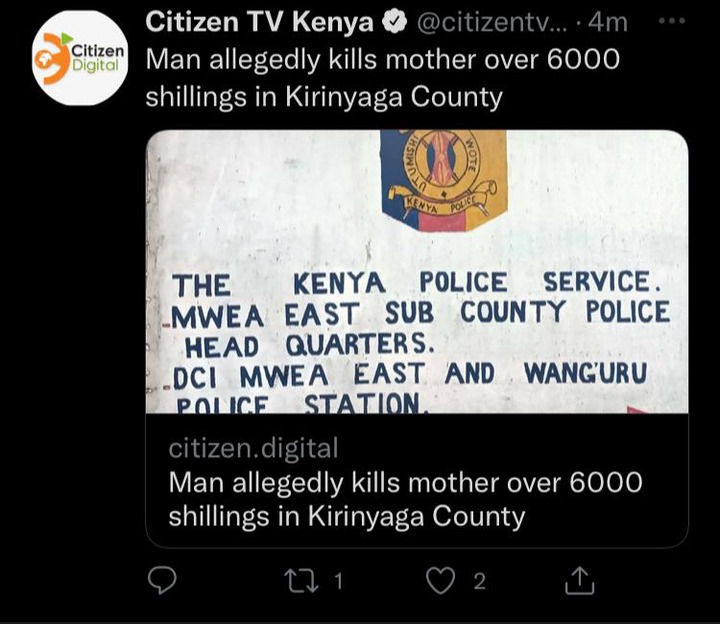 "Office Of The President Must Allow IEBC to Do Their Work" Popular Lawyer Says Amid Standstill.