By Stan_Ka_Wambu (self media writer) | 3 months ago

A family from Murang'a county is in distress after their attempts to bury their kin who died two years ago is hindered by their neighbors. 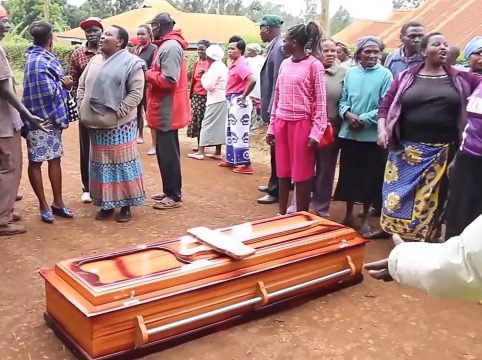 According to the family who hails at Gatuuma village in Kandara, Murang'a county, the village has no access road and they have to be allowed by their neighbors to trespass through their land to get to their home who have denied them access.

According to David Mwangi, his brother died in September 2019 but the neighbors denied them way through during the burial day forcing them to take the body back to morgue.

David said that another family member died early this year due to pain and depression the family is going through following the situation. The two bodies are still in morgue where the bill has risen to over Ksh 350,000.

He added that his father died 7 years ago and the mourners were allowed to trespass by one of the neighbors. But during the ceremony he blocked the way and everyone was forced to look for an alternative way out after the burial.

Mwangi also said that their efforts to have the access roads leading to their village demarcated has not beared any fruits for the past 14 years.

He claimed that the roads were encroached by some people who grabbed public lands and urged the government to intervene.

Here Are 8 Kenyan Politicians With The Most Followers in Twitter.

"If You Don't Register, Then No Reason For Me To Contest" ~ Raila Odinga

"Do You Want Me to Quit ? ", Raila Odinga Warns His Backyard As He Reveals What Worries Him More