By NancyL (self media writer) | 2 months ago 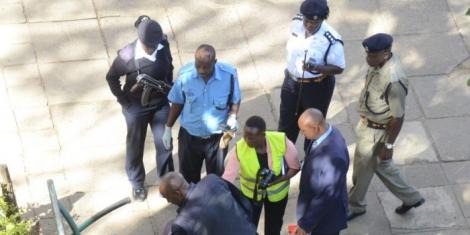 Police officers at a past crime scene

A female police officer is reportedly admitted to hospital after she was knocked down by her police boss.

According to the source, the police boss, who is also a woman, hit the junior officer with a vehicle while inside the police station. It is not yet clear whether it was accidental or an intentional knock.

The injured officer was then rushed to the hospital where she is reportedly admitted.

Sikika Road Safety, the whistleblower, noted that other officers in the station are not willing to report the matter to authorities because the police officer who knocked down the college is a boss in the station.

Sikika Road Safety has since threatened to expose the police station and the suspected officers if actions are not going to be taken against them.

"A lady Police officer has hit another lady with a vehicle and she is admitted at the hospital while other police officers in that police station are trying to cover up for her because she is the boss there ......... We will not keep silent on this Wacha KIUMANE SASA," the source said.

However, for security reasons, the police station is yet to be revealed to the public.