By Professor00 (self media writer) | 1 year ago 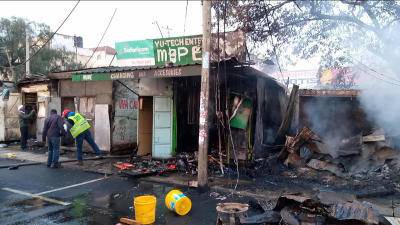 Members of the public view the damage caused by a fire outbreak in at the main bus terminus in Naivasha which reduced property worth millions of shillings to ashes. The town does not have a fire engine after the county government recalled the only machine exposing area residents to a series of fire incidents.

Another fire broke out early Wednesday morning night at Kabati estate in Naivasha, destroying property worth millions of shillings.

In the last two months, the town which does not have a serving fire-engine has recorded over ten fire incidents.

The fire incidents which have been on the rise lately, saw one minor living with disability burnt to death and tens others left homeless.

During the Wednesday morning incident at Boma area opposite Milimani primary school, emotions ran high as the residents lashed out at the county government for lack of a functional fire engine.

Reports indicate that there was not even single fire-engine or personnel from Nakuru County Fire department to battle the two hours inferno.

This is because six out of the seven fire engines possessed by the County have been grounded due to mechanical problems.

And for the two hours, residents used water in buckets and tree branches to battle the fire before a fire-engine from National Youth Service (NYS) training school in Gilgil offered to assist in containing the fire.

In the latest incident, a suspected electrical fault saw a furniture shop, several houses and a motor vehicle burnt down before the fire was put out.

David Gikonyo, a worker in one of the shops said that the fire was caused by an electrical fault adding that lack of fire-fighting equipment hampered efforts to stop it from spreading.

“We used all the water we had in trying to control the fire and if we had a fire-engine this inferno could have been contained,” he said.

Mwangi Muraya, a resident in the area said that Naivasha residents had suffered for long due to lack of planning and accountability by the county government.

“The county decided to relocate the fire engine from Naivasha to Nakuru and as result we have been left to suffer every day,” he said.

Local leaders condemned the malfunctioning fire department in the county adding that it had cost Naivasha residents property worth millions.

A Way Out For The Soaring BodaBoda Crime Rates: Police Say