By Peter.ekuru.com (self media writer) | 6 months ago 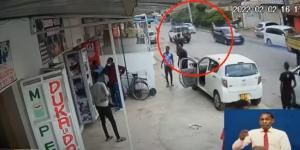 Police have launched investigations into the alleged abduction of a renowned businessman captured by CCTV cameras at a Nairobi estate.

According to the footage obtained by HAKI Africa, the businessman identified as Roba Abduba Sereka is bundled into a Landcruiser hardtop at gunpoint along Muhoho Road in Nairobi's South C estate. The incident took place on Wednesday, February 2, at 10am.

The CCTV footage further shows the vehicle speeding away after residents and passersby tried to rescue him and find out who the abductors were.

According to the family, the 60-year-old man had just left his home to run errands in the nearby Green Valley Shopping Center within South C estate when he was accosted by armed men in plain clothes. 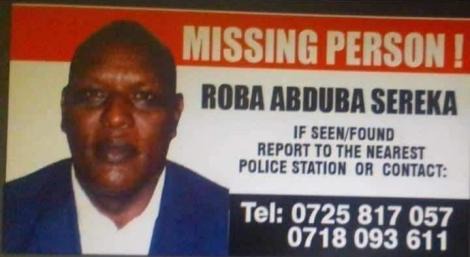 "He left home to run some errands but after 20 minutes, he called me asking me to prepare him tea. I waited until 12 noon assuming that he had gone to the Mosque. At around 2pm we became worried because his phone was off," one of his relatives stated.

The family has called on the government to speed up the investigations to establish the whereabouts of the Marsabit-based businessman.

"If they have anything against him, let them follow the right channels, but we want him to be released back to us," another family member stated.

The abduction ordeal has forced leaders from the pastoral Marsabit region to intervene, describing the businessman as a prominent person in that area.

Led by Marsabit Governor, Mohamud Mohamed, the leaders called on the law enforcement agencies to come clean on the whereabouts of Abduba.

"Roba must be produced in court if at all he is involved in any crime or suspected. Let him face the law, not abductions," the Marsabit Governor stated.

The same sentiments were echoed by nominated Senator Naomi Waqo who questioned whether the law enforcement officers are in control of what is happening in the country.

Langata Sub County Police Commander, Benjamin Mwathi, confirmed to a local media house that the incident is being investigated.

The List Of The Four IEBC Commissioners Who Rejected Presidential Results.