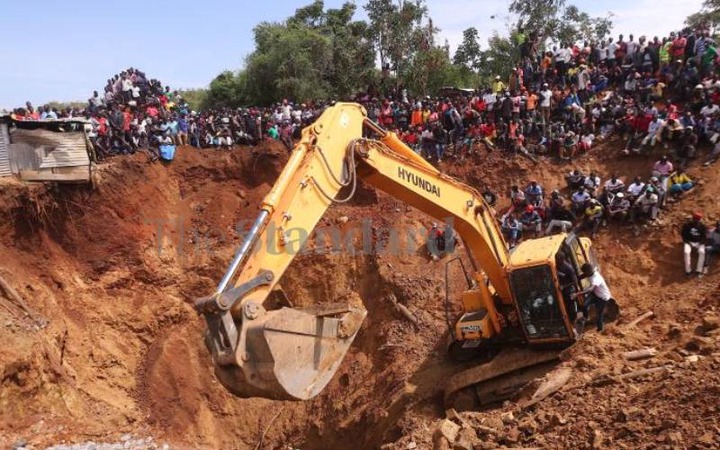 A family which lost two relatives three years ago after a gold mine collapsed, are among those waiting to know fate for their beloved ones who have been trapped inside a collpased gold mine since Thursday.

Residents from Abimbo village in Bondo, Siaya County on Friday flocked the accident scene curious to know the fate of eight miners who got trapped inside the gold mine.

Many of families for the victims are too traumatized to even speak to the media. Among the victims is a 20-year-old man Kelvin Onyango, who was only five months' old into the mining business.

Onyango's brother Petro recalled how they had an engagement with his brother nonets before the fate. He expressed their optimism that Kelvin would come out alive.

"He came home for lunch, and had bought his wife a few items before returning to the mine," recalled Petro. Mr. Petro added that shortly after Kelvin had left, they got a call that the mine had collpased and Kelvin was among those trapped inside.

He noted the incident rekindled bad memories for them, after they lost an uncle to a similar tragedy, and also a brother-in-law to such incident few metres from where the recent tragedy occurred.

Before the tragedy, witnesses narrated how the victims had spent hours inside a small shaft, digging keenly in search of the gold.

Only a long pipe that the miners were using for communication with rescuers offered grim of hope. Earlier in the morning, authorities had managed to talk to one of the trapped miners before he went silent.

In efforts to rescue any victim who could be alive, a multi-agency team pumped oxygen inside the shaft as tracing efforts continued.

With the rescue operations ongoing, it has since emerged that the collapsed mine is among those that had been declared as illegal.

Deputy County Commissioner Richard Karani revealed that the eight were part of 10 people who were in the site, where two had left shortly before the incident. He too expressed his hope that the victims would be found alive.

An Expectant woman spends over 40K on food to feed her eight Children.