By TheKamams (self meida writer) | 5 days

Police in Iten has nabbed a Premio driver who tried to escape after he caused a road accident along the Kabarnet-Iten highway.

The accident that happened at Cheptebo along Kabarnet-Iten road on Sunday afternoon left four people who were occupying the pick-up which overturned escaped with minor injuries. The accident involved a Toyota Pickup and Premio car. 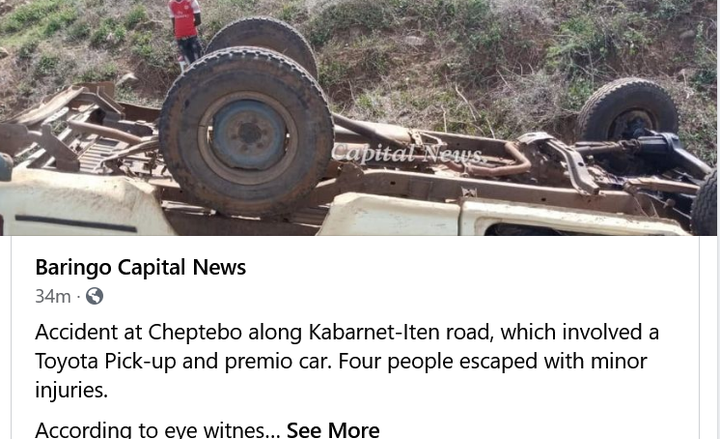 Eye witnesses who were at the accident scene told Baringo Capital News that the driver of the Premio car was driving at a high speed. While he tried to overtake the pick-up, another car appeared from the other lane of the highway causing the Premio driver to use the emergency brakes but unfortunately, it was too late leading him to be hit by the pick-up that was following it from behind.

The pick-up swayed and rolled several times after the driver hit the Premio as he tried to avoid hitting it.After knowing that it was his mistake, the Premio driver tried to escape by speeding off but the police who had a roadblock at Biretwo enter managed to arrest him after receiving information of the car escape after causing an accident.