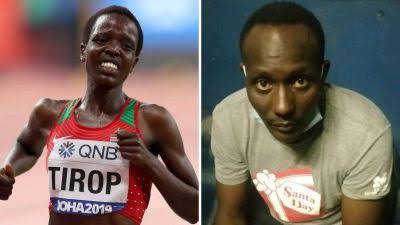 So far three suspects in the murder of the athlete Agnes Tirop have been put in custody including the prime suspect Ibrahim Rotich. According to reports, the suspects are expected to be arraigned this week. Police officers have also revealed that the prime suspect in the murder of Agnes has been transferred from the cell where he was put in Mombasa after his arrest. The police officers have however not revealed exactly where Rotich is being held awaiting trial in a court of law.

As the police officers conclude the investigation, they have said that the suspects will help them in exposing the CCTV images from slain Agnes Tirop's house.

Ibrahim Rotich is said to have secretly taken property belonging to Agnes and transferred them from her house to the house of the third suspect.

More details says that detectives are also reviewing the CCTV footage from Agnes Tirop's house so that they can get more clues into the athlete's final moments. Security officers who are dealing with the investigation have said that they have a raft of items in their possession and they are making progress in the ongoing investigation. The suspects are also expected to help in finalizing the investigations.