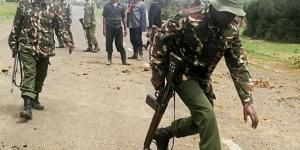 New details have emerged about the attack in Widho, Lamu County where six people lost their lives while several houses were torched in the Monday morning, January 3 incident.

Speaking to the media on January 3, Coast Regional Commissioner, John Elungata dismissed earlier claims that the attack was orchestrated by the militant group, Al Shabaab.

The police boss attributed the attack to an existing land conflict between squatters and ranch owners in the region. He further requested the residents to cooperate and assist the police in conducting investigations.

According to police reports, one man was shot dead while another was hacked. The other four including a business owner and his staff were locked in a house before the assailants set it ablaze.

Bodies of the deceased were taken to the Mpeketoni Sub-County Hospital morgue for identification.

One of the survivors, in an emotional interview, narrated her encounter with the perpetrators of the heinous act.

"They ordered me to lie down. They made an inquest on my name, religious affiliations and tribe," she stated.

Area residents began fleeing the region, expressing fears of a subsequent attack. However, police launched a manhunt to track down the perpetrators of the cowardly attack and assured the constituents of safety.

Earlier on, a multi-agency team comprising officers from the Kenya Defence Forces (KDF) and the Anti-Terror Police Unit (ATPU) were dispatched to beef up security in the area.

Lamu West Member of Parliament, Stanley Muthama, called for a thorough and expedited probe into the matter.