By Shahhhh (self meida writer) | 7 days

Police officers from Jogoo road have allegedly shot a man dead in a Robbery gone wrong after the group of three people allegedly tried to rob residents in their presence.

In a news report that has been shared by the ma3 group, it has been revealed that the deceased was among three people who were allegedly heading on a mission before they were stopped by a group of police officers.

This was followed by a dramatic scene after they allegedly started exchanging fire and in the process, one of them was allegedly Gunned down as his colleagues scampered for safety.

Reports have revealed that the suspects who had been Disguised as Boda-boda operators were allegedly armed with weapons where police were able to discover or rather recover one of the guns.

However, according to the reports given by several kenyans, they have accused the government of being behind the increasing rate of crime in the country due to lack of jobs among Youths.

According to the reports given by these section of kenyans, they claimed that it was so unfortunate that lack of jobs would make some of them do odd jobs in order to make a living.

Due to this reason, Kenyans have urged the government to create more jobs for the already increasing number of unemployed Kenyans instead of focusing on politics adding that this was the only way in which crime was going to decrease in the country. 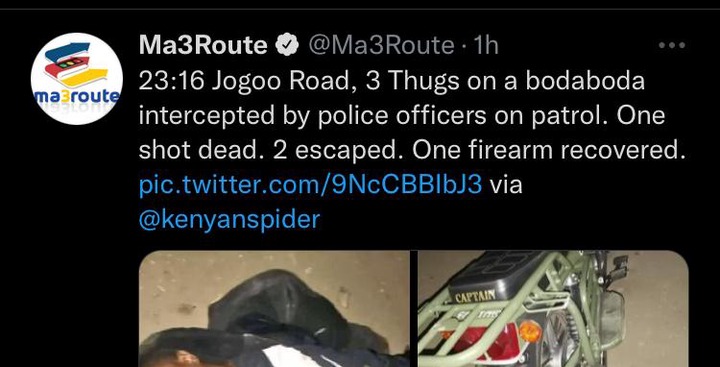