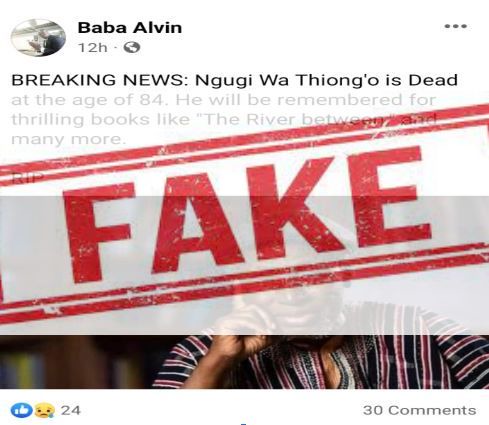 Ngugi wa Thiong'o is alive and well, contrary to rumors circulating on social media. On Monday night, news began appearing, and several Kenyans took to their timelines to spread misinformation.

Some powerful people believed the hoax and offered their condolences. However, the fact checker has disproven the stories, so at this point we know for sure that they are not true.

On Monday, Ngugi's kids denied the rumors and stated that their dad was fine. The son, Mukoma wa Ngugi, appealed to Kenyans to stop circulating false information.

We can't have these rumors of your death coming out again. As I type, I am having a conversation with Baba @NgugiWaThiongo_. "Sure, we're all going to die someday, but there's no reason to hasten the process," he tweeted.

Wanjiku, Ngugi's daughter, tweeted her thoughts on the reports: "It is just another rumor!" Everything's fine!

A Kikuyu intellectual and author from Kenya, Ngugi wa Thiong'o is a member of the Kenyan elite. He once wrote in English but now generally writes in Gikuyu.

His body of work spans literary and social critique to children's literature through a wide variety of forms, including novels, plays, short tales, and essays.

A Facebook post saying Ngugi wa Thiong'o is dead has been investigated by The Star Newspaper, which has concluded that the report is false.

The Star Newspaper commissioned this fact check and received funding from the United Nations Development Program, the African Fact-Checking Alliance Network, and Code for Africa's PesaCheck.

Forget Raila's 6000 Per Month, Here Is The Category of Kenyans Set to Receive Money From Ruto's Govt

I Fasted And Prayed For 7 Days For My Husband To Win Berlin Marathon, Kipchoge's Wife Reveals

Why Single Ladies Should Focus On Achieving Their Visions And Dreams

Disbelief Among Residents As A Man, 42, Writes A Suicide Note Before Committing Suicide