Man found having sex with a cow

By Ngigisamuel001 (self media writer) | 1 year ago

Residents of Mwamoriango, Nyamagesa, Nyaribari Masaba Kisii County were left in rude shock after a  50-year-old man was caught red-handed having sex with his neighbor’s cow on Sunday. 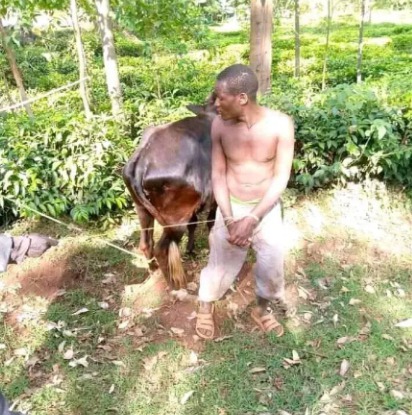 According to the owner, the man tied the cow at a near bush where he defiled it.

The owner raised alarm and attracted residents who arrived and expressed their disappointment with the unmarried man.

“The man should marry and not rape cows. He is mature enough to live with a woman,” Brian Mboga, a resident said.

Mboga said it was a big shame for the man to do such an act in the society.

Jackline Meta, another resident said the man fears women and this might have led him to rape the cow.

“He runs away immediately he sees women passing near him," she said.

“We are worried about how he convinced the cow before raping it yet he is unable to seduce women who he comes across,” she said.

Content created and supplied by: Ngigisamuel001 (via Opera News )

3 Animals That Die Immediately After Mating, See Photos And Why