Inside Uhuru's Plan to End Nairobi Traffic in Three Months

By Dallasnews (self media writer) | 13 days ago 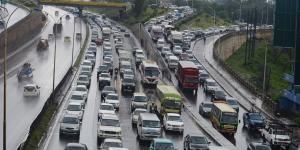 The government has announced a raft of measures aimed at curbing the Nairobi traffic menace within the next three months.

According to the State House Chief of Staff, Nzioka Waita, the first phase will involve completion of the four bypasses including Eastern, Western, Northern and Southern.

Waita affirmed that the roads are in advanced stages and would be launched by President Uhuru Kenyatta in December.

“Traffic jams will end in Nairobi, you are going to see an entirely different city that you have not seen before."

"By constructing these roads, we have a complete Nairobi circular and you can now go around Nairobi without passing through the city centre,” he stated.

The Chief of Staff added that through the Kenya Urban Roads Authority (KURA), the government will continue constructing roads in small towns and estates within Nairobi. He pointed out that these measures, along with pedestrian walkaways, would aid in mitigating the congestion experienced in the city.

The Ksh17 billion Western Bypass project began in 2019. The 16 kilometre road begins in Gitaru and ends at Ruaka where it links to the Northern Bypass.

The government further instituted plans to make both the Northern and Eastern bypasses dual carriageways. The projects will cost an estimated Ksh40 billion.

The Southern Bypass, on the other hand, starts at the junction of Nairobi-Mombasa Road and Likoni Road and ends in Gitaru.

Further, the Nairobi Expressway is also set to transform the city's transport system.

The multi-billion project starts in Mlolongo through the Jomo Kenyatta International Airport and the Nairobi's Central Business District to Westland's area along Waiyaki Way and terminates at ABC Place. The project is set for completion in March 2022.

YouTuber Lyn Ngugi Involved in a Road Accident on Her Way To Tanzania.