Fight Over A Woman Leaves Another Man Dead In Bungoma County

By TwinsM (self media writer) | 3 months ago

A man was fatally stabbed in Bumula, Bungoma County on Monday during a battle with another man over a woman.

As per the police, the person in question, identified as Titus Wamalwa, died on the spot after he was stabbed by Oliver Wafula in the chest with a kitchen knife. 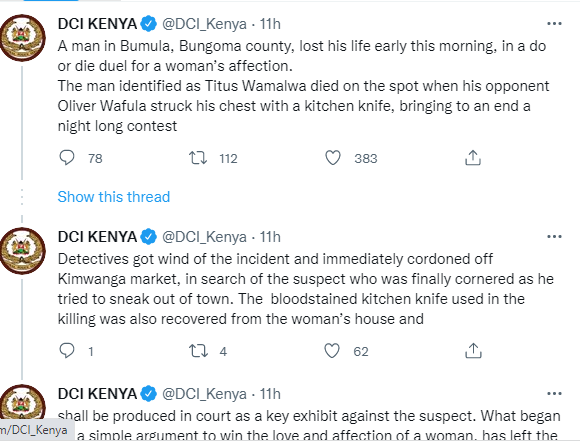 The two are said to have begun the battle in the said lady's home, who was just identified as Njoki.

"In the encounter staged at Njoki's house, the suspect behind the killing suffered powerful punches from the deceased, who is rumoured by to have been an amateur pugilist," DCI said.

With Wafula nearly losing the said fight, it is asserted he rushed for the kitchen knife prior to stabbing his adversary

"On the verge of defeat, the suspect abruptly went after a kitchen knife in the house and drove it deep into his rival's chest, killing him on the spot." 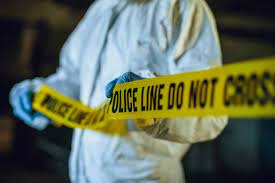 However, the suspect is said to have gone into hiding after committing the shocking act, though would later be cornered at Kimwanga market as he attempted to escape town.

"Criminal investigators found out about the incident and quickly cordoned off Kimwanga market, looking for the suspect who was at last cornered as he attempted to escape town," DCI said

Police additionally noticed that the murder weapon had been recuperated at the location of crime and will be utilized in court as a vital exhibit against the suspect.

"The bloodstained kitchen knife utilized in the killing was likewise recuperated from the lady's house and will be produced in court as a critical exhibit against the suspect," DCI said. 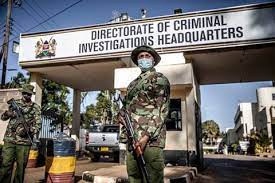 Cars that you should be careful when buying.