By Ndindinyoro (self meida writer) | 11 days 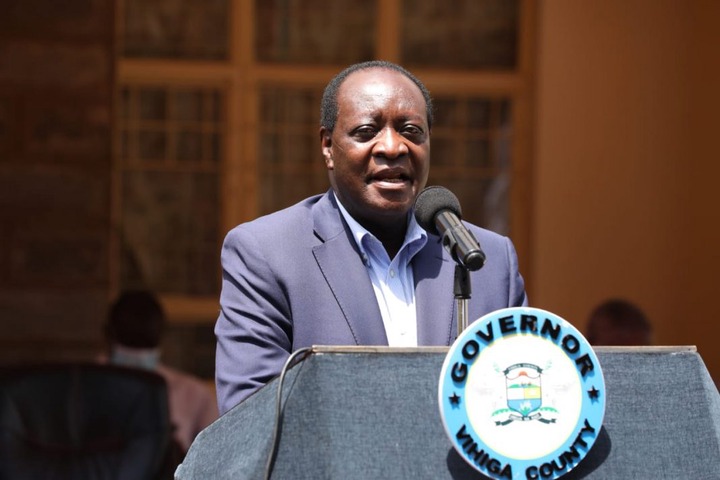 Residents have called on the Senate Standing Committee on Health to conduct thorough investigations, prosecution and conviction of everyone involved in the theft of Covid-19 funds in Vihiga County.

Activist Evans Muswahili, in a letter to the Committee, notes the civil society tried its level best to get the documentation regarding how the funds were spent without success, and now hope that the Senate will use its powers to compel governor Wilber Ottichilo to account for them.

Ottichilo is expected to lead his team in appearing before the Committee, and has been trying to dodge the haunting questions on Covid-19 funds expenditure, with some of his staff implicated looking for ways to dodge the law taking its course.

The Senate Standing Health Committee has decried the way Governors are ignoring to appear and we know very well that our space scientist would really love to avoid any other grilling.

He is likely to be greeted with questions on how the morgue for Covid-19 victims was taking shape after he had said it was his flagship covid project and refuses to meet the health workers on the day to discuss their pending salaries. The morgue has since been condemned to be demolished.

Muswahili says as a resident of Vihiga County who is passionate about good governance and respect for human rights, he is confident the draft report will be updated.

“As the Senate’s Standing Committee comes to Vihiga to meet our County Executive, it is my desire that the committee looks into allegations of misuse of COVID-19 funds that may have escaped the eyes and ears of previous auditors,” he said.

Some of the allegations of fraud that he has highlighted include but not limited to:

The Senator for Vihiga contributed sh. 200,000, a certain trader contributed sh. 30,000 on the same day. The governor gave an undertaking of the percentage contribution from him, his deputy, CECs, Chief Officers and Directors for a period of three months; in line with the President’s directive.

It is obvious that these voluntary contributions were deducted from salaries of county public service officers. Our county has never given a breakdown of the amount collected and how the funds were utilized.

4. Disappearance of vouchers – bulk vouchers used in Vihiga county Covid-19 response funds running into millions of shillings were found missing when Ethics and Anti-Corruption Commissions detectives came to the county offices demanding them. This was pure sabotage aimed at concealing the runaway graft.

5. Abnormal expenditure by Rebecca Esolio – Rebecca Esolio, a nurse at Vihiga County Referral Hospital signed vouchers running into millions of shillings on activities that did not take place.

Surprisingly, no health worker was paid this amount received by Miss Esolio but their names were used to sign out lunch and transport. These allegations require serious investigation. Logic dictates that some senior officers used Esolio to access this money.

Supervising what??? The CHVs denied ever receiving any COVID-19 allowances or training at that time. This should be investigated.

The question that begs is: why would media briefing be this expensive? The county leadership was merely making local updates to the local population. Could this warrant such a huge expenditure?

On 5th May 2020 Edebe also received Sh655,000 allowances and on May 11, 2020 Edebe received a voucher of Sh39,000 to settle hotel expenses. The County COVID-19 Response Committee members who were reached denied ever receiving any allowances during that time. Who then received these purported allowances?

10. MCAs sensitization expense that never was – Paul Ayodi is said to have received Sh739,750 on 9th April 202 to sensitize MCAs on Covid-19, something that the MCAs denied saying that they never saw the cash. Which MCAs were trained? Whose frontline workers could the MCAs be?

The Civil Society movement in Vihiga upon receiving leaked government reports on the allegations above wrote to the county government asking it to confirm or deny the reports.

The CSO movement asked government to provide the accurate information if at all what was in public domain was inaccurate. The government never responded nor gave a contrary report.

To that end, it is taken that whatever leaked into the public domain is the true position.

Wetende is a worried person after details emerged that his Covid vehicle could be the topic of the day once the auditors dig even deeper into those imprests he used during the time.

It has also been whispered to Daily Express that the officers who were given a paltry Sh10,000 from the funds by Wetende are to go to record statements on why the figures differ with what Wetende submitted.

He had submitted that each officer was given more that Sh60,000 for training and sensitisation as frontline response team.

Also worried, according to word from the corridors of Emanyinya is one Chief Officer Mary Anyienda who is said to have made so many contractors curse the day they met her to supply covid emergency items.

To date these suppliers have never been paid yet Anyienda already got her share of the covid loot from them.

She even refused to pay the very innocent youths who used to man entry points after they had sacrificed their time for more than two months.

One still wonders why the high priest of Emanyinya has stuck to her as an accounting officer for two departments for more than 6 months yet there are other idle substantive chief officers within the system. The skirt knows best.

The Civil Society is calling on Senator George Khaniri to take up this call and be able to ask these key questions so that they get the report from Senate on what truly transpired now that the County Assembly of Vihiga was paid up with tenders to keep quiet as residents suffer.

Content created and supplied by: Ndindinyoro (via Opera News )

The Origin of Mother's Day Celebration