Police Launch Manhunt For Murder Suspect After Escaping From Custody

Police in Bungoma County have launched a manhunt for a murder suspect who escaped from custody.

Evans Ndiewa, 34, deceived an officer identified as Paul Rop on Sunday, January 16 that he wanted to go to the latrine.

The officer who was working at Cheptais Police Station consented to accompany him much to his dismay that the suspect had other plans. 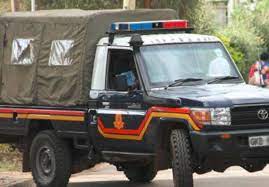 "Paul Rop reported today at around 0800Hrs that while he was accompanying one suspect to the latrine namely Evans Ndiewa aged 34 years, he managed to escape by jumping over the nearest fence and ran towards Cheptais Secondary School," the report read to some extent.

Ndiewa was booked to be arraigned before Sirisia Law Courts on Tuesday, January 18.

An alarm was raised and officers who were on standby tried to pursue the suspect in vain.

"An alarm was sounded and he was chased by the said officer and other officers from Cheptais Police Station," the report additionally read.

It has been established that officers were likewise sent to his rural home where it is believed he first went to.

From Kenya to the world: Heko DCI

Gachagua's Speech Interrupted In Nandi, See What Nandi Man Awarded Him Before He Continued Speaking