The directorate of criminal investigations has confirmed the arrest of a mysterious man who is reported to have been arrested by the DCIs After Attacking the police.

In a news report that has been shared by a reliable source of information, it has been revealed that the suspect whose name is yet to be disclosed allegedly attacked a police vehicle by ramming on it forcing police officers to rush to the crime scene in order to find out what happened.

According to the reports given by the DCIs, it has been revealed that the suspect was arrested and taken to the police station for more investigation and questioning over the same incident where he is reported to have been found with mental issues before he was taken to the hospital.

While reacting to this incident, kenyans who took to their different social media accounts to express their opinions and suggestions on the matter have called upon the National Police Service to reveal why the police officers in questio'have been had to use Alot of bullets despite the fact that the man was not armed.

According to the reports given by most Kenyans, they claimed that it was so unfortunate that the police officer decided to open fire despite the fact that Alot of people were at the crime scene.

Addressing this issue, most Kenyans have claimed that the police officer should have stopped the man without having to shoot due to the increasing number of people who often lose their lives after being struck my a stray bullet as it has been witnessed in the past few months where people have been killed by Mistake. 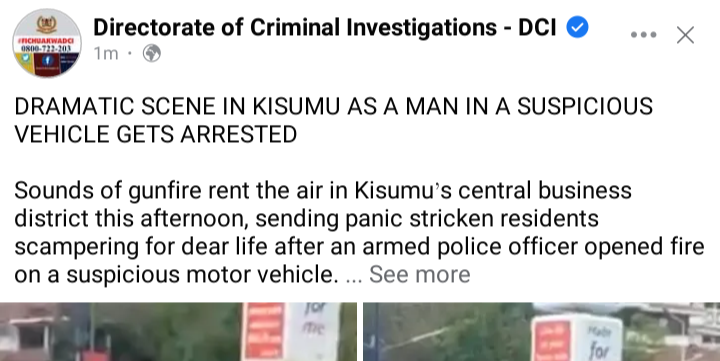