Panic in Busia as Man is Brutally Murdered Allegedly Over This

By NancyLwambi (self meida writer) | 22 days

Panic has engulfed an area in Matayos within Busia county after a man was brutally murdered by unknown people.

Sources say the 58 years old man was found murdered outside his house. His death is now being linked to a piece of land.

It is being alleged he was fighting with his neighbour over a piece of land, with all of them claiming the land.

However, it is not known whether the said neighbour is behind his death or not.

"Body of 58-year old teacher found outside his house in Matayos, Busia county. It's alleged that the man was fighting over a piece of land with a neighbour," the source captioned the picture that was taken from the crime scene. 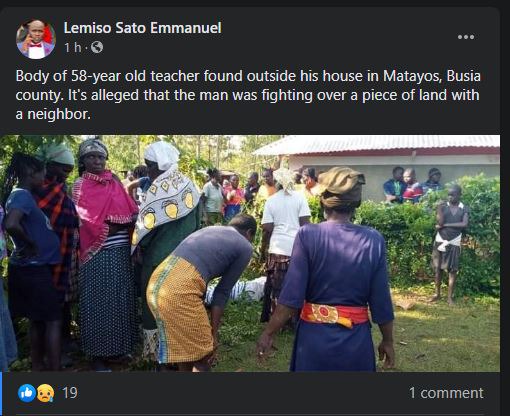 Many murder and suicide cases are on the rise in the country, and not just in Busia County.

Yesterday, an Eldoret man brutally murdered his wife by cutting her using a sharp machete