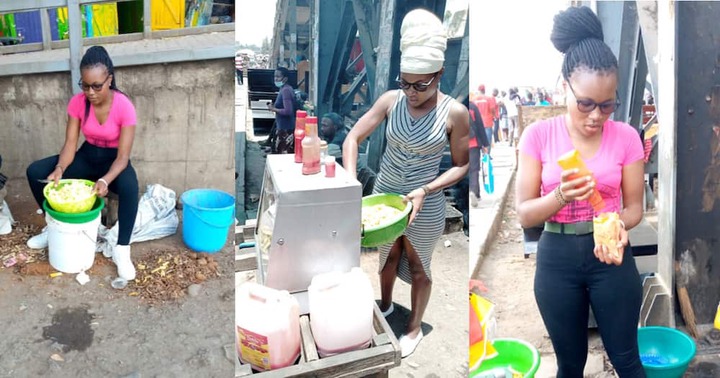 Bevalyne Kwamboka the viral student of Kenyatta university has now come out clear and clean that she was not financially supported by Millicent Omanga.

While addressing the citizen television journalist,she noted that she was grateful for what Millicent Omanga gave her.she narrates of how it rained as she was preparing to begin her hustle and it began raining.The rain persisted for long hours and she ended up not selling anything that day .

She took her photo in the rain and posted on her Twitter account on anyone to offer her with an umbrella.The Twitter went viral on all social media platforms and that is when Omanga came to her rescue.She sent her technical team who bought her potatoes worth three hundred and fifty shillings ,aprons and umbrellas.

These photos again went viral when Omanga posted that the lady was settled even stockwise and money to run her hustle.She narrates of how she was surprised by her friends who were telling her she is now on another level.She was aroused when she went to Twitter and found what Omanga posted and was astonished.She made various attempts to get to her which were not fruitful and she ended up replying on her Twitter account tagging the outspoken member of the senate.Omanga replied stating that lady was ungrateful after receiving help.

Bevalyne has highlighted the problems she is now facing after her second Twitter reply.She says that she now stares eviction by the KENHA as her working point is under a foot bridge.She has expressed her fears since the business is the one that keep her going,pays her school fees and maintains her in school.

She highlighted that the intention was not to be ungrateful but to just inform the public to avoid being disguised as rich.She has called upon the goodwill citizens to support her hustle so that she can finish her final year at Kenyatta university.

What is Cooking? Three Uhuru Senior Appointees Spotted With Jimmy Wanjigi in Machakos